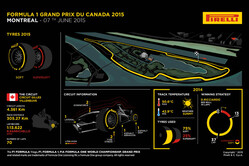 Canada has the same tyre nomination as Monaco - soft and supersoft - but quite a different challenge. The track is a lot more demanding for tyres than Monaco, which should lead to a greater degree of wear and degradation. The biggest forces at work are longitudinal (acceleration and braking) rather than lateral (cornering) - and these are the factors that influence wear and degradation in Canada. The nature of the track also means that there is more opportunity to use tyre strategy to gain track position, with a variety of different strategies in the mix last year. Although the demands on tyres are not especially high, due to a low-grip surface, there are some big kerbs that require a tough tyre structure, and the circuit is also famously hard on brakes. Uncertain weather is often a factor at the semi-permanent track, which adds another element of unpredictability.

Paul Hembery: "Canada often turns out to be one of the best races of the season, with a set of track characteristics that are not replicated anywhere else throughout the year. As a result it often throws up a few surprises and it's also possible to win from lower down the grid, especially if you use a clever tyre strategy, or if it rains, or if there is a safety car: all of which are very possible in Montreal. Once again we have nominated the soft and supersoft tyres: the supersoft compound has been completely redesigned this year to provide even greater resistance to graining and blistering. With the cool weather that we often see in Montreal, this resistance to graining in particular is something that should be appreciated by the teams. As anything can happen in Canada, the best strategy is always one that has a certain degree of flexibility, allowing teams to react to changing circumstances. As we saw in Monaco, the strategy stakes can be very high."

Grip in Canada is generally low: especially at the start of the weekend when the track is 'green', because the former Olympic venue is not used extensively during the year. The low grip tends to continue into the race: one of the key reasons why so many drivers have acquainted themselves with the infamous 'wall of champions' - leading to incidents that can sometimes prompt a safety car.

The kerbs are an important factor in Canada as the cars hit them at around 130kph, testing the tyre structure. However, during laboratory tests in Milan, Pirelli's Formula One tyres are accelerated at speeds of up to 450kph to test their integrity in conditions above the usual limit - with the structure remaining intact.

Unlike Monaco, the cars tend to run low downforce in Montreal, in order to maximise their top speed of over 300kph on the straights. There are no really long corners in Canada: instead it is all about acceleration and braking, with the challenge for the brakes in particular having caught some teams out in the past. Drivers must also be careful to avoid wheelspin, which can accelerate tyre wear.

Last year's strategy and how the race was won: A variety of one and two-stop strategies were seen at the race last year, which was characterised by two safety car periods. Daniel Ricciardo won the race for Red Bull using a two-stop strategy, taking the lead on fresher tyres with two laps to go. The top four all stopped twice, with the highest-placed one-stopper being Force India's Nico Hulkenberg in fifth, who started on the soft and completed a 41-lap stint before switching to supersoft.

Expected performance gap between the two compounds: 1.0 - 1.2 seconds per lap.