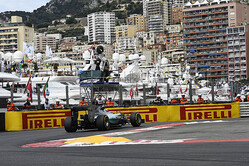 There was very little action during free practice today at Monaco, with the second free practice session featuring limited running due to heavy rain. With not so much rain forecast for the rest of the weekend, the teams decided that there was little to be learned by heading out in the slippery conditions, with the notorious Monaco barriers in close proximity.

After an overnight rainstorm the track was damp at the start of FP1 in the morning, meaning that the first runs were all carried out on the Cinturato Green intermediate tyre. After the track dried out, the teams all switched to the P Zero Yellow soft tyres, which have been nominated together with the all-new 2015 P Zero Red supersoft this weekend. This tyre features a new construction and compound, but Lotus driver Pastor Maldonado was the only competitor to try it this afternoon, over a very wet lap that was inconclusive. If it's dry, the other drivers will try it out for the first time during FP3 on Saturday, which is set to be a crucial session.

With 10 minutes to go of the session, McLaren's Fernando Alonso ventured out again on the intermediate tyres, assessing the levels of grip on a drying surface in order to calculate the crossover point: the point at which it becomes a good idea to switch to slick tyres. The Spaniard was joined by a handful of other competitors at the very end of the session, all running the intermediate tyre. The full wet tyre was also run today, meaning that all four tyres brought to Monaco were used at some point.

There are some different aspects to the historic Monaco circuit this year, the most notable of which is the fact that 80% of the track has been resurfaced with fresh asphalt. Not only that but some of the barriers have moved slightly, and ambient temperatures remained under 15 degrees centigrade all day: all factors that influenced driving conditions.

Mercedes driver Lewis Hamilton was fastest in both sessions today, using the soft tyre on each occasion. He set his fastest time at the end of FP1, and the beginning of FP2. Hamilton's best time of 1m17.192s on the soft today was still quicker than the fastest 2014 FP2 time from Fernando Alonso, driving for Ferrari, who set a 1m18.482 on the supersoft last year.

Unusually for a grand prix weekend, there will be no Formula One running tomorrow, with only GP2 taking to the track. Separately from the official GP2 sessions, former driver Martin Brundle will demonstrate a GP2 car fitted with prototype development tyres in a larger size than those seen currently.

Paul Hembery: "We had very little meaningful running today, which means that our new supersoft tyres will be run properly for the first time during Saturday morning's session. This is clearly going to be a crucial hour when it comes to determining race set-up and strategy. While it's hard to extrapolate much data from today, the new surface should have the effect of decreasing wear and degradation still further, on what is already the least strenuous track for tyres of the year. This should make a one-stop strategy entirely achievable, although some teams may try to gain an advantage by doing something different. Most of all, I feel sorry for the fans today who sat through a lot of rain for very little action. With such a small amount of data for the teams to fall back on though, it's more likely that we will see an unpredictable qualifying and race over the weekend. Before then, we're looking forward to demonstrating a new GP2 tyre concept tomorrow, which underlines our capacity to produce a variety of different tyre solutions to meet any request."