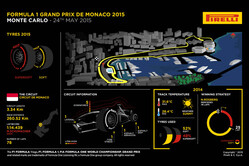 The Monaco Grand Prix is the most prestigious race on the calendar, where the P Zero Red supersoft makes its debut this year, alongside the P Zero Yellow soft. The supersoft compound offers the most grip and performance of Pirelli's entire F1 entire range, with a brand new compound for 2015. This is a low working range tyre, with a rapid warm-up ideally suited to the sinuous streets. Pirelli enjoys an important historical connection with Monaco too. The very first world championship Monaco Grand Prix, held in 1950, was won by the great Juan Manuel Fangio in a Pirelli-equipped Alfa Romeo. Fangio's last Monaco victory in 1957 (which occurred 68 years ago this week) was also achieved on Pirelli tyres, in a Maserati.

Paul Hembery: "Monaco is one of those races that everyone looks forward to: there are very few words that can adequately describe the spectacle. We're bringing our brand new supersoft tyre for the first time this year, together with the soft, as has been the case since we started our current Formula One era in 2011. Monaco has often been described as a circuit where overtaking is impossible, but we have seen in the past there how tyre strategy and degradation has often led to positions changing, including on-track overtaking. In particular, the way that drivers use the new supersoft tyre, with is notable performance advantage, will be crucial. There are a number of unusual aspects to Monaco, including the timing of the sessions themselves, which only add to the famed unpredictability of this race and inevitable comparisons with the roulette wheel. But as is always the case, the right preparation and collection of tyre data during practice will put any driver in a strong position to maximise their potential in the race as well as the crucial qualifying session."

Monaco features a number of unconventional aspects. It's the race with the lowest average speed and slowest corner of the entire championship, emphasising the importance of mechanical grip from the tyres rather than aerodynamic grip. All these factors make it ideal territory for the supersoft tyre, which offers the most grip of the entire range as well as the fastest warm-up. Monaco is also the only race that doesn't run to the FIA's mandatory minimum distance of 305 kilometres.

The supersoft is the only P Zero tyre to have a brand new compound for this year, created to offer even greater resistance to graining and blistering. One of the key evolutions on all the tyres this year has been optimisation of the footprint pressure and temperature distribution. This presents a more even contact with the asphalt, improving grip and handling: vital attributes on the streets of Monaco.

The track surface in Monaco is the least abrasive of the year. There's also an unusual format for the sessions, with a break on Friday meaning that the circuit is open to public traffic. This has a profound effect on track evolution, with very little rubber being laid on the circuit.

With limited run-off area, there is strong potential for incidents that can bring out the safety car, and this has to be factored into strategy calculations. Because of the very low tyre wear and degradation that characterises the Monaco Grand Prix, a one-stop strategy can often work.

Last year's strategy and how the race was won: Last year the winning strategy was a one-stopper, helped by a safety car period that fell conveniently in the pit-stop window. Nico Rosberg (who won the race from pole) and his Mercedes team mate Lewis Hamilton both stopped on lap 25 of 78, switching from the supersoft to the soft. The highest-placed two-stopper was Romain Grosjean in eighth, with a number of other drivers using innovative race strategies to make up places from lower down the grid.

Expected performance gap between the two compounds: 1.0 – 1.1 seconds per lap.

Expected weather conditions for the race: Generally bright with cloudy intervals and ambient temperatures ranging from 15 degrees overnight to 23 degrees during the day. There is, however, the possibility of rain showers throughout the four days of the grand prix.