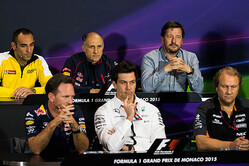 Let's start with a general question to all of you. What did you think of what came out of last week's F1 Strategy Group, some of the proposals that have been put forward for 2017 and if we could start, perhaps, with Christian?
Christian Horner: Well, as you know, we're not supposed to talk about the content of these meetings and referring to the press release it was a very positive meeting and lots of good things talked about for 2017. There was obviously a large amount of discussion about the future and about current issues. I think there is positive work going on regarding the 2017 chassis. There were debates about refueling, whether that should be reintroduced or not. Differing opinions on that. It was a constructive meeting. I wouldn't say that we nailed down a whole load of decisions out of it, but certainly a lot of discussion about the relevant topics at this point in time.

Toto?
Toto Wolff: There's not a lot to add to what Christian said. It was a good meeting in relation to the 2017 regs. We all agree that we want to reintroduce quicker cars, get the lap times down by five to six seconds. Make it more of a driver formula, maybe get rid of the electronic start procedures, go back to more conventional clutches. Refuelling was discussed, with many various opinions. But we all agreed that this is what should be happening, so it was good.

Robert?
Robert Fernley: I must have been at a different meeting. I don't think it was a good meeting at all. After 18 months I think we failed totally to agree on any form of cost control. There's absolutely no way there is going to be any equitable distribution of income. Power units are going to remain the same. And whilst I agree that there were some good discussions on 2017, the fundamentals of Formula One weren't addressed at all.

Paul?
Paul Hembery: Yeah, I guess there were a couple of points that came out that relate to tyres. One was regarding the choice of compounds made by the teams and we're working in that regard with Charlie [Whiting] and the FIA to come up with a proposal that meets that requirements, that gives us a level of safety in the choices made and also to provide something interesting for the fans. That's ongoing but it looks positive, what we've seen so far. Then 2017, obviously we don't know whether we will be here or not but the idea of going to wider, 420 width tyres, was something we feel is a good idea.

Franz?
Franz Tost: I wasn't involved in the meeting; therefore it's difficult to evaluate the contents. What I miss is the discussion how we can come down with the costs and how we will find a way to create an interesting - apart from the technical side for the future - but we will see then the 2017 regulation is being discussed and then we will see what will come the result.

And Cyril, what did you glean from it about 2017?
Cyril Abiteboul: Well, 2017 seems a bit far away. But we'll get back to that a bit later. I think it was an interesting meeting, as always. Formula One is a very sophisticated and complex environment, so it's very difficult to agree on one single set of measures that can address the issues. I think to a certain degree everyone agrees on what has to be done, what has to be delivered by Formula One in the future. So I think it's good that we share a vision. It's very much how we get from where we are today to that vision that is now the topic for discussion.

OK, I'm sure that others will come back this point later in the session, but let's just move on to individual questions. Franz if we could start with you. Obviously today the running was a bit truncated by the weather but in the first session and the beginning of the second, it looked like your two drivers, Verstappen and Sainz, were up to speed very quickly, with Verstappen setting the second fastest time this morning. How impressed were you with what they did?
FT: I think we have the ingredients together that both cars have to be in qualifying three and we have to finish in the points. We have a good car, a competitive car. Both drivers do a very good job. The team is also improving. Therefore I don't see why we should not score a lot of points, so I'm quite optimistic.

Well, the car obviously looked good in Spain as well. Is the car more consistent? Because that is certainly is something you needed coming from last year, right?
FT: The car is more consistent. The car is more controllable, especially under braking and in acceleration. The car is easier to drive as was the case in the years before and as a result of this of course the drivers have a good chance to get the most out of the car without making any mistakes.

Paul, coming to you, we didn't get the chance to see the revised supersoft tyres today, they stayed in their blankets in the second half of FP2. Obviously they are going to be run at the next few races. A bit frustrated by that and how do you expect it go here over the next couple of days?
PH: Well, it was probably more frustration for the teams. The only thing we gained was the resurfacing. It doesn't seem to have changed very much. It's a very low-impact circuit from our point of view, so we don't envisage any issues.

Going back to the meeting last week. One of the things that was proposed was that the teams should be able to tell you which two tyre compounds they want you to bring for them for grand prix weekends. How do you feel about that suggestion and also the whole notion of making the cars, as Toto said, five to six seconds a lap faster?
PH: Well, it touches on what I've already mentioned that we've taken on board those comments and we're working on a solution with the FIA that meets that requirement but also guarantees that we have a level of security over the choices made but also giving the sport itself some interesting elements. So, we're confident and I think from initial discussions we're on a good road to finding a solution for that. Going quicker? It depends on how you achieve that. Wider tyres would certainly help that. From a tyremakers point of view you'd want to know how you can contest that. We have limitations on testing today and if the cars are going to change dramatically you wouldn't really want to end up in Jerez in February, in the winter trying to find out if it's going to be workable solution or not. The principal is fine, there needs to be a little bit of work I'm sure done on the practicalities.

Thank you. Robert, you were one of the ones proposing this free tyre choice idea, what do you like about the concept?
RF: I like the fact that it brings the decision-making down to the teams and I think it will bring variability in terms of the racing tactics of what goes on and I'm really pleased that Pirelli have embraced the idea and are coming up with a solution that will give them the safety as well as the team a little bit more choice.

On a Force India-specific note, what's the latest on your revised 2015 package? What's the forecast on when it's going to be out and the latest forecast on the performance gain it's going to give you?
RF: Well, they're encouraged by performance gain, I think that's [what] I'm getting through from the engineers. Hopefully it's still on target for us for Austria. I would like to think we could do it for the race but it's most likely going to be the test.