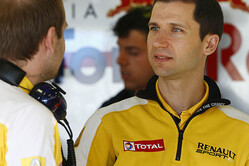 Remi Taffin, Director of Operations: Monaco is a special track in many respects and everyone has a favourite element, whether it's the atmosphere, the circuit layout or the tight racing. For engine engineers, it's the challenge of working on parts of the engine or software that you don't normally focus on. In Monaco we explore maps and settings to target driveability and performance on low speed and low rev settings.

The average speed is the lowest of the year and the corners are so tight that power is not important; you need stability under braking and an engine that responds well out of the corners. For these reasons you may use levels you will not touch for the rest of the year and conduct work that is specific for just this one track. It's necessary as every hundredth of a second could be a couple of places on the grid and, as we all know, grid position in Monaco is crucial.

Monaco is a tall task for everyone and our focus will be to work with both Red Bull and Toro Rosso to maximize performance. Anything can happen on track so we need to be prepared to take advantage should opportunities come our way.

The Monaco circuit gains over 30m in altitude in 10secs from Sainte Devote up to Casino Square so engine maps will be designed to maximise acceleration and hit the rev limit at the top of the hill. Casino Square is one of the only overtaking opportunities on the circuit, but it comes down to who gets the best acceleration out of Sainte Devote so particular care is paid to pedal and torque maps in this corner.

It is very important to limit the rear tyre wear by managing the rear slip. This reduces the number of pit-stops required during the race, which is crucial at a circuit well-known for its lack of overtaking opportunities.

The sheer number of turns round the track means that the engine isn't given any time off and cooling becomes crucial as a result. With grip and downforce being so important we can't afford to put any cooling holes or additional louvre panels to help out so we will look at dispersing the temperatures through the water and oil system.

In the absence of a French Grand Prix, the Monaco Grand Prix has become Renault's home race, with more guests coming to this race than the whole of the rest of the season combined.

Renault engines have taken victory on six occasions in the Principality. The first win came in 1995 with Michael Schumacher. Jarno Trulli and Fernando Alonso won in 2004 and 2006 respectively, with Red Bull Racing duo Mark Webber and Sebastian Vettel alternating victories from 2010 to 2012.

Engineers focus on slow speed balance rather than high or medium speed in Monte Carlo as the track has the lowest average speed on the calendar at just 150kph.

Top speed peaks at only 290kph, compared to well over 315kph at the last event in Spain. Less than 30secs - roughly one third of the lap - is spent at full throttle, which places an emphasis on the overall package's driveability rather than outright performance.

The tunnel section is the only chance the cars get to hit top speed apart from the short pit straight. The engine needs to have good acceleration through the Tunnel so the driver can reach top speed quickly as the straight is only 670m from the exit of Portiers to the chicane. The cars reach 290kph just before the braking point for the chicane.

Exploring the lower limits of the PU and managing the low torque levels into and out of the slow corners so the driver gets the correct response when he needs it is critical for overall lap time gain.

Monaco is a very bumpy circuit with lots of camber change. This can induce drops in oil pressure as the oil pumps aren't able to properly scavenge the oil system, or the oil tank succumbs to an unexpected loading. A temporary lack of oil pressure can be harmful to the turbo as lubrication is vital at the speeds at which the turbo operates.

Energy recovery is easy with the amount of braking points - the 19 corners are all taken at an average of less than 100kph and the MGU-K will have more than enough opportunity to recharge the ES.

Since energy recovery under braking is relatively easy, Monaco is one of the few races of the year where fuel consumption won't be critical, particularly as the overall race distance is so short and there is so little time spent at full throttle.

The hardest braking point of the track is the Grand Hotel (or Loews) Hairpin. The track descends from the Mirabeau and turns almost 180° back on itself in front of the hotel. When the cars round the hairpin the engine is running at just 45kph and around 4,500rpm, the lowest speed and revs it reaches on track at any point in the year.

The Rascasse corner is one of the hardest braking points and the cars drop to 55kph. Recovering energy here tops up the battery at the end of the lap, with the energy deployed almost immediately on the pit straight.

With under 30secs of the lap spent at full throttle and a large amount of energy recovered under braking, the MGU-H may not be used to recover energy at all since its contribution will be so small and there are benefits to peak engine power if H-recovery isn't used.

The climb through Beau Rivage to Casino Square, which lasts just 8secs, the 9 secs Tunnel section and the 7secs pit straight are the only parts of the track where the drivers reach top gear and are really the only opportunities where the H can recover energy. It is one of the few tracks where the top gear used may not be used due to the short straights.

The Swimming Pool complex is another chance, but recovery depends on track position. If the driver is in clear air he will take the corner at 200kph and be able to achieve full throttle between the turns. If he is in traffic then he will be balancing brake and throttle pedal usage and the amount of energy recovered will be less.