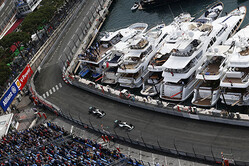 A solid start for Mercedes AMG Petronas on day one of running at a rain affected Monaco Grand Prix circuit.

Lewis topped the times in both sessions, with Nico finishing the morning in P9 and the afternoon in P2. The opening session allowed the team to review one-lap pace, as well as looking at longer runs. The second session was affected by rain which restricted running for the majority, but the fastest time was still 1.29s faster than in FP2 last year. Both drivers used the prime (soft) tyres throughout each session, with the exception of the start of the first and end of the second session when inters/wet tyres were used on the damp circuit.

Lewis Hamilton: I had a great first day here. Every year, it stuns me how fast we have to think out there, with so much information coming at you, and you have to be more reactive and agile than anywhere else. The target is always to get on the pace as quick as you can and to be very specific and precise in the set-up changes you make, so you don't go down the wrong path. The balance today was not far off, so we have been tuning that with our programme, and there are still some areas to improve on. When it rained, we didn't need to take any risks so stayed in the garage, but the lap I did at the end showed that the black paint covering the white lines is even more slippery than the lines themselves! Now we need to work well tomorrow, make the right steps forward with the car, and pick up on Saturday where we left off today.

Nico Rosberg: It's great to be back at this legendary circuit, the car felt great. Monaco is the highlight of the year for me. We are very quick here again, so I'm quite confident for this weekend. I didn't get it all together today, I had a lot traffic, so the next practice session on Saturday morning will be very important.

Toto Wolff, Head of Mercedes-Benz Motorsport: It was a pretty satisfying first day here in Monaco, in unusually cool and then wet conditions. Lewis settled into his rhythm quickly and looked really confident out there today, topping both sessions. Nico had a good day too, running a little ahead of everybody else in FP1 and brushing the wall, which put him down the timesheets as the track improved - and then setting competitive times in FP2. The car is working well but there are still areas for us to improve before Saturday. There is a day's break in running but it will be busy tomorrow as we complete our preparations for the business end of the weekend. It will be an intense battle between both drivers and with our rivals. We're looking forward to it.

Paddy Lowe, Executive Director (Technical): It was a fairly trouble-free day and a solid start to the weekend. The rain for the majority of the second session reduced our planned running but nevertheless we covered all we needed to do today apart from running the Super Soft tyre. The conditions were a bit cooler than we expect over the weekend and this made it extremely hard to get the harder Prime tyre to work. Nico was slightly affected by a small brush with the barrier at Tabac which caused some slight damage to the rear right wheel. We made some precautionary changes to the front suspension between the sessions but fortunately everything looked fine with the car. Overall, we're happy with the pace of the car so far, but the changeable conditions today mean we still have a lot of work to do in the final practice session on Saturday to perfect the setup for qualifying.