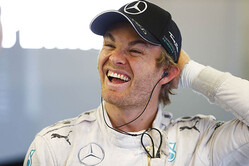 Nico took his first pole position of the season and the 16th of his Formula One career. Lewis will line up P2 on tomorrow's grid, completing a third front row lockout of the season for the Silver Arrows. Both drivers ran twice in Q1 (prime / prime), once in Q2 (option) and twice again in Q3 (option / option).

Nico Rosberg: Today was a good day in the office for me. The conditions were really difficult out there but, thanks to the team, we nailed the setup and got it all together. I really feel great in the car this weekend and was able to improve from session to session. So now I hope to have a good start and to control it from there. I'm really looking forward to tomorrow and can't wait for the race. It's been a positive start but Sunday is where it really counts...

Lewis Hamilton: It was quite tricky out there today. I did the best I could - but it wasn't quite fast enough and Nico did a really good job. I think he's been a bit more comfortable with the balance than I have so far this weekend. The rear was under-rotating quite a bit today, which means you have oversteer and poor traction, so I lost a lot of time in the middle sector. In the end, P2 isn't so bad. Of course, being on pole makes life a bit easier but it doesn't mean you can't win from elsewhere on the grid. Generally speaking, the outside of the grid is cleaner here so you can usually get a good start from there. The main opportunities to gain places will be the start and the pit stops as it's hard to overtake but I'll give my best shot like always. Every race you do, you're thinking about racing for the Championship and I'll keep driving the same way I always do. It may not have been the greatest weekend so far but it's not over yet - tomorrow is where it counts.

Toto Wolff, Head of Mercedes-Benz Motorsport: That was a brilliant lap from Nico in Q3 to take his first pole of the season. It just goes to show that things turn quickly in Formula 1. There have been lots of people asking questions about whether he could bounce back or had lost his momentum. But they have to remember that these guys are tough, they're resilient and they're not so much affected by these ups and downs in results as people think. Nico stayed focused this weekend, did his job so far and took a great pole position. Lewis suffered from an oversteer balance on his laps and it's very hard to find the limit at this circuit when that's the case. But he still took P2 and can target a strong race tomorrow. We have a solid half-second gap today but I am sure things will be closer in the race. The conditions are very hot and we will have to manage the tyres carefully tomorrow in order to find the right balance between durability and speed. I'm expecting a pretty interesting afternoon.

Paddy Lowe, Executive Director (Technical): That was a great qualifying session and we're really pleased to get the front row at Barcelona. It's a very important result because overtaking is more difficult than usual at this track. Likewise, it was pleasing to be able to save two new sets of option tyres for the race - one with each car - and that will be an advantage tomorrow. Congratulations to Nico on his first pole position of 2015 - in fact, he set two laps capable of securing pole, so it was a fantastic job and I'm really very pleased for him. Conditions out there were pretty tricky, too, with a lot of gusting wind. Looking at the relative performances, we seem to have maintained a good differential at this first European circuit where everybody brought a lot of upgrades; which is a really important achievement. We're looking forward to tomorrow and to seeing if we can convert our front row positions into a lot of championship points.