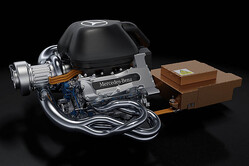 While in 2014, the first season of the new formula, each driver was limited to five power units, this year the allowance drops to four.

Ahead of next week's meeting of the Strategy Group, which will discuss the matter, and on the day Daniel Ricciardo had his fourth engine of the season fitted, ahead of the second practice session of the fifth race, team bosses admitted that a rule change looks unlikely.

"I don't know whether it will pass," admitted McLaren's Jonathan Neale. "There are some conflicting views. There was a certain degree of unanimous agreement amidst the teams in Malaysia. I think that position has changed a bit from what I can pick up in paddock rumour at the moment, but what matters most is what case is put to the strategy group next week. I think that if it isn't simple, if it becomes... if it goes to five engines with a thousand strings attached and complex other paraphernalia around it, I don't think it will go.

"I think it would be advantageous," he continued, "we would obviously benefit from it because we're in a situation where, as a new entrant to the sport with Honda, we would very much like that additional fifth engine - we would, wouldn't we? - and we think that would be fair for us.

"I'm pretty sure Renault would feel the same way. They're investing in the sport, they're a big organisation, it's important for their brand as well that they have some degree of glide-path on this but it's a fair race for everybody and I accept that . If it's four it's four, if it's five it's five."

"Personally, I would support the fifth engine," said Red Bull's Paul Monagham, unsurprisingly. "The strategy group is the first step of three to a rule change. If it proceeds, all well and good. If it doesn't you play the hand you're dealt."

"I think the original reason that people talked about a fifth engine was because in this year where we first reduced it to four per year, there was very little running on Fridays and it was seen that this was the explanation," added Mercedes’ Paddy Lowe, "so the original reason it was agreed that we would look at introducing a fifth engine to improve the amount of running that was done on a Friday. We would agree with it in that context. We will see what happens in the strategy group."

"We'll go before the strategy group who will need unanimous agreement," said Williams Rob Smedley. "It's, at the moment, of less consequence to us. We've used one engine and another group of engineers were working towards four engines. We'll see what's decided at the strategy group. I think one point that I would pick up on that you made is that the drivers' championship, the constructors' championship could be compromised. Yeah, it could, that's what the rule book is for."

Indeed, whilst Mercedes would not block such a move, it appears to be its customer teams that are unhappy with the proposal. According to Force India's Bob Fernley, teams fear the anticipated rise in costs, a fifth engine said add another £1m to their annual bill.