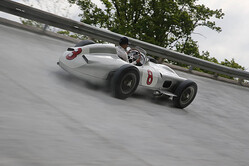 On 11 September 2015, 60 years will have passed since Mercedes-Benz competed in its final Formula One Grand Prix before taking a hiatus of almost 40 years.

The race in question, the 1955 Italian Grand Prix at Monza, would prove a fitting end to an era which was as successful as it was brief for the Silver Arrows - Pole Position and victory going to Triple World Champion elect Juan-Manuel Fangio, with Piero Taruffi completing a one-two for the Silver Arrows and a 26-year-old Stirling Moss setting the fastest lap of the race before suffering a seventh lap retirement.

In a year which also marks the 60th anniversary of Sir Stirling's unbeaten Mille Miglia record - an incredible time of ten hours, seven minutes and 48 seconds, averaging 157.65 km/h over the 1,000 mile route - Mercedes-Benz classic re-united Moss with the machines in which the British icon enjoyed what he himself labeled his "Greatest" year.

On a crisp, bright morning in late April, the iconic 300 SLR '722' which powered Moss to that historic Mille Miglia victory lined up alongside the all-conquering W 196 R and W196 Streamliner Grand Prix Silver Arrows at the legendary Autodromo Nazionale Monza.

At the wheel of the Streamliner, the 85-year-old Moss rolled back the years in his classic light blue overalls. While in the cockpit of the Monoposto, double Formula One World Champion Lewis Hamilton completed an all-star Silver Arrows line-up to take on the legendary Monza banking.

For Moss, reflecting on that memorable year brought back fond memories: "1955 was, for me, the greatest year," he says. "I think my best race was the Mille Miglia. 1,000 miles on the Italian roads which weren't closed - there were trucks, medical vehicles, people moving around to get the best viewpoint. But the 300 SLR was, in my opinion, the greatest ever racing car and that was the decisive factor. To drive for Mercedes-Benz was very special at the time, as they were head and shoulders above the rest in every way. This was the one team that you really wanted to go to and it was an exciting time to be racing. The circuits were dangerous - some more than others, of course - and when you went into a race you were aware of the considerable danger. But you had to get yourself into a situation where you were barely lifting for this corner, or trying to take another flat. To the teams and drivers today, I would say: "Don't think about competing - but definitely do it." Racing improves the breed and I think, particularly for Mercedes, so many things have improved because of racing. The charisma that goes with it is enormous. To get out there, to be the best and to show it, is important for the brand."

For Lewis, getting behind the wheel of a classic Silver Arrow was equally as evocative an experience: "Driving round the old banking in this incredible car with Sir Stirling right there below was just magical," he enthuses. "I was shouting out to him: "Stirling! This is amazing!!" but he was so focused I don't think he heard me! When the peak power kicks in at around 4,500 rpm there's a big boost - it's just a fantastic engine and the gearbox is super smooth. But it was so bumpy on the old part of the circuit and you have to be so precise with your inputs in these old cars to correct them as they move around. It must have been a real challenge to race so closely at speed. People try to compare modern day drivers to guys like Stirling but it's just impossible. What we do today is so different with all the electronic systems and so on. Back then, it was just raw machinery and raw drivers with balls of steel - they really were supermen! There must have been such a big fear factor - exciting but also terrifying, with your heart right on the rev limiter all the time. Back then, they would set off for each race knowing there was a good chance they might not come back alive. After driving this car I got only a sense of what that must have been like. I think mentally I might have been crazy enough to race with those guys. They had a huge amount of heart to go out and do what they did. I like to think that's been what had separated me as a driver since I was a kid."

The two stars, past and present, took a keen interest in the relative challenges of the various racing eras; reflecting on what it takes to tame a Grand Prix winning machine: "The most modern car I've driven was a Tyrell in Japan in around 1995," says Moss. "I only took it round to see what it was like but was absolutely staggered by the way, when you put your foot down, there was no wheelspin whatsoever. Is the power delivery smooth in your car?"

"That must have been with the big tyres - we have a lot of wheelspin!" Hamilton replies. "You can't just floor it - you have to be really smooth, as there's a lot of torque. Normally with a turbo the delivery is not so smooth but, because we have the Hybrid system, that fills in the gap and you have no lag at all. The Mercedes engine has very good driveability. It's difficult to say whether my style would have suited the cars back in the day as I don't really know what they needed - whether they demanded you to be smooth or aggressive. People say I'm more the latter and I like an oversteering car. What did you need to have back then?"

"Personally, I like a car set up so it will go into an oversteer situation," Moss muses. "I think, if you can handle it, that's definitely quicker than understeer which just sends you straight off. We didn't have any way of changing the car during the race - it was set up in practice and then you were stuck with it. I think my style was fairly similar to Fangio's. I followed him very closely - wherever he went on track I followed and it seemed to work out! I certainly would have changed it if I thought there was a better way of doing it. But, in that era, you just had to be a bit stupid and put your foot down!"