Rosberg: I got it wrong 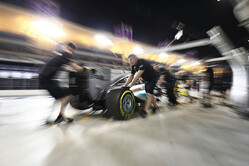 Starting from the second row of the grid, Nico Rosberg admits that he "got it wrong" in qualifying.

"It was strategy-wise today that I got it wrong," admitted the German at Sakhir, "because I was thinking too much about the race and I underestimated Sebastian's speed and also how much it would cost me, and what I mean is that taking it easy in Q2 on the race set of tyres that we start the race with.

"I lacked the rhythm as a result," he continued. "I didn't get into the rhythm and I just had one shot at it at the end with a new set. So that's where I went wrong.

I'm disappointed, because Sebastian beat me. If I was second it would have been... damage limitation, but being third, that's realty not ideal."

When it is pointed out that in Q2, he was 1.2s slower than his teammate with the time that got him into Q3, and therefore he was taking less life out of that set of tyres, the set he would start the race with, but that his initial answer implies that he didn't really expect to get pole, he replies: "I did. But I didn't expect to go on used in the first part of Q3. I thought we'd go to new tyres. Also I didn't expect the used tyre to be so slow, like the used tyre was really, really poor.

"I thought used tyre would be pretty good, especially because I took it easy on that used tyre as well in Q1. But it was really poor. So that meant that I only really had a shot there at the end.

"That was poor management," he admits. "Really, really poor management. Especially because Sebastian's in front of me. Otherwise it would be, sort of, OK still.

The management on your side, he is asked.

"My side," he replies. "Well, together, we always do it together - but I'm definitely largely responsible for that."