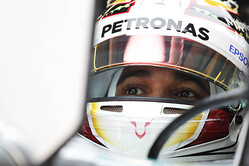 Whilst Kimi Raikkonen has been officially reprimanded for an incident in FP2, Lewis Hamilton escapes sanction for seemingly doing the same.

In the final moments of the second session, as cars queued at the end of the pitlane following the red flag brought about by the clash involving Sebastian Vettel and Sergio Perez, Raikkonen and Hamilton were seen crossing into the slow lane in an attempt to get past Marcus Ericsson who had just left his garage.

Following a post-session investigation the race stewards, led by Mika Salo deemed that Raikkonen "drove in a manner deemed to be potentially dangerous in the pit lane", a breach of Article 30.13 of the Sporting Regulations. As a result the Ferrari driver was given a reprimand, his first of the current season.

However, in terms of Hamilton the stewards opted to wait overnight until they had more evidence.

Curiously, following what appears to be a failure in terms of official protocol, this morning a statement was issued which reads: "During Free Practice 2 an official message was sent referring to an incident involving Car 44, Lewis Hamilton being under investigation at the end of the session.

"As no official summons was sent to the team after the end of the session, the Stewards would like to confirm that a preliminary investigation was undertaken into the incident in the pit lane and no further action was warranted in this case."

"The rule is that you do your starts on the left and allow people to pass on the right,” said Hamilton when asked about the incident. "I saw Kimi was kind of blocked because there was a car coming out of the garage so Kimi went around him and I followed. I just went to the right. As far as I am aware, it was legal."