Wolff: Lewis is in the zone 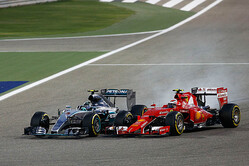 Reflecting on the Bahrain Grand Prix, Mercedes team boss Toto Wolff laments loss of 1-2 in final stages of the race.

Whilst many, including Ferrari, can only dream of a 1-3, Toto Wolff is bitterly disappointed that a brake issue robbed his team.

"It was a good race," says the Austrian. "The changes we put on the car after a hard Friday proved to be the right ones. The car was the quickest car out there on both tyres.

"Nevertheless it's a pity," he admits. "Of course we must be happy with P1 and P3. No doubt about that. Anyone who doubted that Nico lacks the killer instinct saw a Nico today who drove his best race of the year so far, at his best, fighting hard, overtaking. Losing a position at the end because of a brake problem was a bit of a pity."

Asked about the late brake issue that affected both cars, Wolff explains: "He (Rosberg) followed first Kimi then Sebastian. He did lots of fights and hard braking. Because of that we monitored that. But at the end with the backmarkers those brake temperatures went through the roof and we had brake-by-wire failures on both cars.

"Leading into the last lap it was on the hard braking on the straight. The temperatures went sky high and when that happens the brake-by-wire system switches into the conventional system."

Of Hamilton's 'cruise' to victory out front, the Austrian says: "He just did the job in the perfect way. Qualified on pole, a great start and then in control for every stint. He was calm in the car, looking after the tyres, stretching the gaps when he needed to; it was a great drive. He’s in the zone at the moment and you can see that in everything he’s doing."

Asked if he was surprised by Raikkonen's pace in the middle stint on the mediums, Wolff quips: "I think he was a little bit surprised himself.

"We could see that the prime wasn't slower at all, maybe even quicker," he continues. "If you compare this to Qualifying where the prime was two seconds slower that was quite an
interesting result. We were monitoring this. The times were not getting any worse.

"From his point of view it was an aggressive strategy because at the end, after one or two laps more on the option, that tyre would have been finished as well. But they took the risks and it worked for them. I think the sport is in good shape and today we saw that. Two teams fighting with the knife between the teeth for the victory.

Looking ahead to Spain in three weeks, what new features will the team be taking? "Lots of power and lots of updates," he warns. "As a team, you have to keep introducing solid updates and developing the car. You can’t afford to stand still."