Bottas: There's a lot of people making stuff up 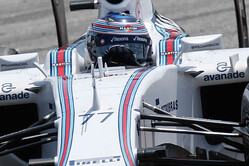 Valtteri Bottas has dismissed media speculation linking him with Ferrari next season, admitting that he doesn't know what his plans are.

Out of contract at Williams this year and one of the hottest properties on the 2015 grid, Bottas is the subject of constant media speculation. Last weekend, the Finn, along with Lewis Hamilton - who has yet to re-sign with Mercedes – was being linked with Ferrari.

Speaking to reporters at Barcelona however, Bottas was keen to play down the speculation insisting that he has not held talks with Ferrari far less signed a pre-contract.

"I saw some and heard plenty of stories and it's sometimes funny to hear those because in the end you know what's the case and what's not," he told reporters.

"There's a lot of people making stuff up," he continued. "The fact is that at the moment I am just focusing on this season and getting the maximum for us as a team. The rest I don't know yet.

"There have always been rumours so I'm not really thinking about those," he continued. "That's for my management to think about. At the moment I am not thinking about any move."

Asked whether a new contract with Williams is an option, he replied: "I am sure they have some kind of plan for my career, for years ahead. If they have something solid for sure they will speak with me but at the moment we haven't spoken about the future. We are not yet at that point.

"We want to win here at Williams," he added, "we have big plans for the future and the team has invested a lot in great people. We made a massive jump from 2013 to 2014. If we keep the development going I think we can again be strong at the end of this season."