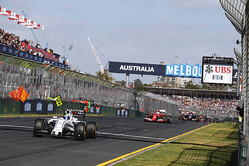 FOM has dismissed a "provisional" calendar for 2016 containing 21 races.

Hot on the heels of the news, announced by organisers in Melbourne, that next year's season opener will take place in April, came news of a 21 date "provisional calendar".

The schedule included Azerbaijan and Italy (Monza), whilst also seeing the Russian event moved to an earlier date in the year.

However, Formula One Management took to the official F1 website to announce: "It would appear that the proposed 2016 calendar has been leaked. This calendar has not yet been approved."

If the "leaked" "provisional" calendar should prove to be accurate, at 21 events the 2016 schedule would be the biggest in the history of the championship.

To date, the 2012 calendar, with 20 races, remains the busiest season ever, and whilst the 2015 calendar revealed late last year looked set to break all records, Korea and German were subsequently dropped bringing the schedule back down to 19.