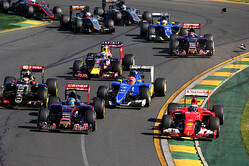 Max Mosley believes that allowing a technical 'free for all' would encourage teams to keep to a budget cap.

The 75-year-old, whose previous attempts to limit spending led to the teams forming their own association (FOTA) and threatening to leave F1 to set-up their own championship, earlier this month warned that the sport faces implosion unless current spending trends are curbed.

FIA president from 1993 to 2009, Mosley admitted that he fears for the future of F1 if it continues on its current course and the teams fails to work together.

"The only way to deal with it is to get everybody to agree," he told DPA News. "You can sit all the teams down and say look collectively we've got a massive problem because some of you have got enough money but most of you haven't and if we go on like this Formula One is going to collapse, so I am inviting you all to agree to a change.

"But they would have to all agree," he admitted. "You can't do it without unanimity unfortunately. I think that could be done but it needs people to make very clear to them that there is a real problem."

The Briton has now suggested that one way of limiting spending would be to give teams almost total freedom in terms of the rules providing they agree to spend no more than, for example, one hundred million dollars a year.

The agreement would be voluntary, but Mosley believes those teams that opted not to sign-up would eventually cave in and be obliged to comply.

"I could imagine that very soon all the teams would be in the budget cap camp," he told Auto Motor und Sport. "They would realise that for 100 million, you could have great motorsport and build technically advanced cars."

Of the three teams that came into F1 in 2010, the year after his presidency ended, only one survives, albeit with a different name and having almost gone under at the end of last year. Three of the other current teams, Force India, Sauber and Lotus, have made no secret of their financial difficulties.