Ecclestone calls for return to V8s 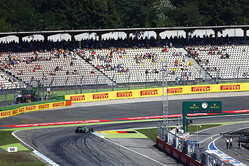 Bernie Ecclestone claims that a return to a V8 formula would bring back the fans and the sponsors.

Just four races into the new season, and twenty-three into the new (for 2014) formula, Bernie Ecclestone remains unhappy with the new, greener F1.

Whilst it might be what the engine manufacturers want it has not proved popular with the fans and though the debate over the sport's new sound might have gone quiet, the fact that the new formula has only seen Mercedes get it entirely right has led to many races becoming a two-horse race.

Ecclestone has never been a fan of the new rules, having stalled the introduction of the new formula for as long as he could. Whilst he initially complained that the sound of the power units was the biggest blow to the sport he now claims that Mercedes domination coupled with the high costs of the units, which has pushed more teams to the brink of bankruptcy, is damaging the sport, having turned off the fans and thereby sponsors.

However, his latest suggestion is the most radical of them all and will not go down well with the manufacturers, he wants F1 to return to V8 engines.

"We need to go back to engines whose costs are more reasonable, and we need to intervene with maximum urgency," he told Gazzetta dello Sport.

"Going back to a Formula One with naturally aspirated engines and KERS, while setting precise constraints, would drastically reduce costs," he continued, "and would be convenient for those already in F1 and for those would like to enter it.

"We'd just need to take the old V8 engines and modify them by increasing displacement to bring power output near 1000bhp," he added. "People would return, the show would return, sponsors would return.

"F1 isn't just about technology, but enjoyment too," he insisted. "We need to think about who buys a ticket, goes in the grandstands and wants to see a great sporting spectacle. It's money doing the rounds; the public pays for tickets, the organisers cash in and pay us, who then forward the money to the teams together with TV rights. But if TV audiences shrink and the public at GPs do too, then it becomes a problem."