Minardi: It's time to review the technical regulations 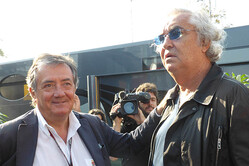 Former team owner Gian Carlo Minardi agrees with Bernie Ecclestone that change is needed in F1 but fears at what cost.

Speaking to Gazzetta dello Sport, Ecclestone argues that a return to V8s would be a win-win solution for the sport, bringing down the costs for teams, encouraging new teams, bringing back the fans and sponsors... it's the sort of nonsense many in the UK are currently hearing from politicians ahead of next month's election.

Veteran team owner, turned driver manager and F1 sage, Gian Carlo Minardi can see merit in what Ecclestone suggests but is unsure if it can be implemented and if so at what cost.

"I've read Bernie Ecclestone's comments and I've already talked about these issues several times, since this Formula 1 makes one think and worry," he says.

"I agree with Bernie," he continues. "It's time to review the technical regulations and come back to "simpler" and cheaper engines, leaving the manufacturers participating in the WEC Championship to carry the commitment of building new generation cars.

"A system in which the cost of a power unit represents a third or a quarter of the entire budget of a team is not sustainable," he adds. "But that's not all. To manage and enter these power units on the car, there is a considerable increase in costs on the remaining items.

"If there is no remedy in the short term, the risk is a throwback to the seventies, when there was only one engine - Ferrari - against all the Cosworths. Today, the risk is to have only one challenge: Ferrari vs Mercedes.

"The economic difficulties of some teams, the skyrocketing costs and the need to revise the rules are not the only clouds on the horizon. After what happened in China at Renault, reliable sources tell me that before the Spanish Grand Prix an extraordinary board of directors meeting will be held by the Chairman and CEO of Renault, Carlos Ghosn, about Renault's future in Formula 1.

"It is not a good sign," he admits. "The board of directors may see just two scenarios; direct engagement with its own team or other more drastic "situations".

"It's true that there are agreements until 2016 with Red Bull and Toro Rosso," he warns, "but it would not be the first time that a manufacturer takes bad roads for our sport, giving the perfect excuse to teams (the few solid and well-funded ones!) that get an engine to withdraw without incurring contractual penalties. A similar scenario would be definitely traumatic. What kind of starting grid would remain? I will not even think about it!

"The team principals have to present new solutions and Mr Ecclestone has to evaluate new entries on the engines front. There are companies are watching - some having already engines - stopped only by the lack of long-term strategies. One, above all, is BMW, which in mid-May will have a new boss, a man with professional experience in motorsport.

"It's time to use all the needed energies, in order to safeguard what for me, and not only me, is still the most amazing sports show in the world."