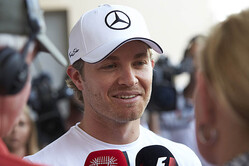 An encouraging start for Mercedes AMG Petronas on bright and breezy opening day at the Circuit de Barcelona-Catalunya. Nico topped the morning session with Lewis just 0.070s behind in P2, while the Brit claimed top spot in the afternoon with Nico P3. Today's programme focused on setup work in the morning and tyre evaluation in the afternoon. Both drivers used the prime (hard) tyre only in practice one, the prime and option (medium) in practice two.

Nico Rosberg: It's great to be back in Europe and back to this track, where we did so many laps in the winter tests. I worked a lot on race pace in the afternoon and was happy with my long run, where we seemed to be quicker than the Ferraris. On one lap I still have a bit of work to do to find some more speed, so I'll be working hard with the team tonight to find out where I can improve. On track it was quite a difficult day for everyone, I think. The conditions were really strange and the track was very poor. I don't know really why but hopefully it will be more predictable for qualifying and the race.

Lewis Hamilton: It's been a fairly decent day - mainly working on setup, tweaking the balance bit by bit. It's often hard to get a good comparison between the sessions with the track and wind conditions changing. The wind was quite strong at times today and really inconsistent around the lap. The car is quite affected by that and it was pretty hot out there in the afternoon too, so I think maybe the temperatures also had an effect on lap times. The priority was understanding the tyres and how they wear because, ultimately, the race is the most important part of the weekend. We've not analysed the times yet but our pace felt pretty strong.

Toto Wolff, Head of Mercedes-Benz Motorsport: It was an unusual day out on track and a good one for us, with one of our drivers topping each session. You could see that it was tricky out there for all the drivers in the field - some of the onboard shots were all over the place and pretty exciting to watch. Both our boys were complaining about a lack of grip and I'm sure that was similar for every team. The second session was quite a strange one, with some unusual gaps between the teams, and we found the car was better on the prime tyre than the option in the hot conditions. Like last year, we looked particularly strong in the third sector, for which you need to keep the tyres in good condition around the rest of the lap - and that's an encouraging sign. There's now plenty of work ahead of us to analyse the data tonight and make the right choices for tomorrow and Sunday.

Paddy Lowe, Executive Director (Technical): It's been a reasonably trouble-free day and a positive start to the weekend. It was quite windy out on track but generally the conditions have been good. The morning session focused on experimenting with setup, while the afternoon followed the usual programme of learning how best to use the tyres for qualifying and the race. Our pace looked encouraging on both compounds but we're expecting another close battle. On the long runs there were some difficult aspects to managing the tyres, so we'll be working hard overnight to put ourselves in the best position possible for the race. Finally, we've brought quite a few aerodynamic updates to this race, so a big thank you to everybody back at the factory for putting in the hard work to get those on the car for this weekend.