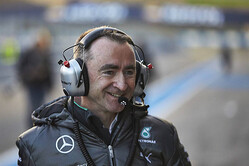 Teams admit to concern over radical overhaul of rules for 2017, insisting that racing under the current rules is good.

As ever the driving force behind the proposed rule shake-up is Bernie Ecclestone, never a fan of the new formula introduced only last year. His call for a return to the old V8 formula, or something similar, has effectively been thrown out, though he is still pushing for 1,000hp units and cars that are "more difficult to drive".

Speaking in Barcelona however, team representatives admit that they aren't so sure change is needed.

"I think that the sport needs to rethink a number of areas," admitted McLaren's Jonathan Neale. "Personally, I think it would be foolish to mess around with the immense amount of good work that has been done on the power units. Maybe some minor adjustments but it's a much more efficient package, it's got some great technology, it's still maturing in the sport and the price can come down if it's left to mature because just we're not putting in the same R&D costs.

"So I would leave that alone," her concluded. "But I would look for... we've spoken about that a step-change in aerodynamics, to make sure that these cars are difficult to drive and maintain that perform gap to the other junior series and Formula One remains an out and out race. We can still have the efficiency, we can still have many other attributes of the sport but I think it should just be a flat-out race."

"I agree," added Mercedes' Paddy Lowe, "above all we must maintain Formula One cars as the pinnacle of motorsport. That's the presentation that Formula One is and that's what maintains the show and the attractiveness to a global audience.

"Even amongst topics such as cost saving, which often comes up, above all we've got to maintain that show and that means the cars must be truly spectacular. But in terms of rule changes, I think it's not absolutely clear that we need to change the cars radically, that's something being discussed. Performance will increase anyway through normal development and we may arrive at the position we want to be through natural development.

"We've been discussing ideas like the use of tyres, how tyres are allocated," Lowe revealed, "but I think we're actually on the lookout for people to come up with interesting ideas. But I still say in that context the sport, in my view, isn't in a bad shape. And I don't think we need to run around thinking we need to do drastic things."

"I think we should leave it alone," said Rob Smedley, echoing the views of his colleagues. "In the main we should perhaps think about stopping tampering with it rather than thinking we're going to create a new set of rules and that's going to fix everything.

"Every time you create a new set of rules, you'll usually find the people with the biggest resource or with the cleverest thinking, or the people who stopped working on the current generation of Formula One cars, come out with quite a big gap. That's what, when we talk about these boring races, that's what we're referring to isn't it? A team dominating at the front - but a team dominates when we have radical rule changes. I think that we do have to seriously think about not changing anything.

"Out front this year you've got Ferrari and Mercedes and that's making for some good races," he continued. "Behind us it's everybody in, isn't it? There's some good racing going on there. I agree with Paddy's sentiment, that there's lots of things we can do with the Sporting Regs, which aren't going to cost a great deal of money. We have to be responsible in how we spend.

"I've said this before. The average man on the street, the people who we're trying to drag into the circuits, or who we're trying to drag into viewing us on a Sunday afternoon, they don't care about spend: they just want to see racing. Even the technology, to a certain extent, is of less interest. So it's got to be the racing spectacle that we put at the forefront. By having a radical rule change you're not guaranteed to increase the racing spectacle - but what you are guaranteed to do is increase costs."

"I think people forget at the moment the racing's actually quite good," said Nick Chester of Lotus. "There are some very good battles up and down the whole grid and as the cars' performance is improving a lot - I think we're seeing two seconds improvement from last year - do we really need a huge change of regulation?

"A huge of regulation is going to open up the grid again, there'll be bigger differences between teams and obviously it's going to add a lot of cost, so I think we shouldn't forget that show's actually not bad at the moment."