Gurmit's View: About that algorithm... 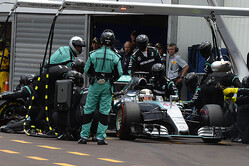 Facing fans on Twitter this week, Toto Wolff was asked if anyone had lost their job as a result of the disastrous decision to pit Lewis Hamilton once the Safety Car was deployed following Max Verstappen's accident.

"Absolutely not," replied the Austrian. "We're a World Championship team and we are not playing a blame game based on a single race."

However, as it is claimed that Lewis himself may have played a bigger role in the decision making process, cartoonist Gurmit dig some digging... and may have found the culprit.