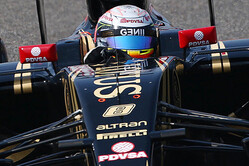 The Lotus driver was warned that Max Verstappen was closing in, the Dutch youngster tucked in behind Sebastian Vettel and thereby benefitting from the blue flags shown to anyone hindering the Ferrari's progress.

In a clever move the Frenchman allowed Vettel through at Turn 6 (Hotel Hairpin) but was able to hold off the Toro Rosso.

Just over a lap later however, Verstappen attempted to pass the Lotus on the approach to Ste Devote, clipping the Lotus in the process and spearing into the barriers, subsequently causing the Safety Car (virtual and real) which was to have a catastrophic effect on Lewis Hamilton's race.

Whilst the race stewards adjudged Verstappen as being responsible for the collision and consequently handed him a 5-place grid penalty for the next race (Canada), many have accused Grosjean of brake testing the youngster and thereby causing the incident.

Not so, insists Permane.

"Grosjean didn’t brake test Verstappen," he tweeted today, "he braked 5m later than previous lap. Data accepted by FIA so the penalty was for Max not RG."