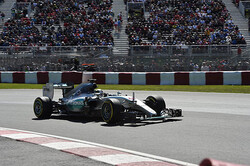 Lewis took his 44th career Formula One pole this afternoon in Canada and his sixth from seven race weekends thus far in 2015. Nico took P2 to complete the 20th front row lockout of the modern Silver Arrows era. Both drivers completed one run in Q1 (prime), one in Q2 (option) and two in Q3 (option/option). Lewis' pole time of 1:14.393 was just under 0.5s faster than the 2014 pole of 1:14.874. Six of the top seven positions were filled with Mercedes-powered cars during qualifying today.

Lewis Hamilton: It's an amazing feeling. This is where I got my first pole and my first win so it's very special. It wasn't the easiest start to the day. I didn't get much running this morning, partly down to me and also the flags, so we went into qualifying a little less prepared than we'd like. But the car felt great this afternoon and the team did an amazing job - especially after yesterday. Ferrari look like they've got good race pace and they're improving all the time, so we have to keep pushing. But hopefully we'll have the edge tomorrow.

Nico Rosberg: I had a good start to the Qualifying sessions and found a nice rhythm between the walls. But then I had a really bad Q3 and I still don't know why. I didn't have the grip like I had before with the last two sets of tyres - it was suddenly gone. It's very strange and that was really disappointing for me. But tomorrow is a long and difficult race and there are opportunities to overtake, so I'm looking ahead in a very positive way.

Toto Wolff, Head of Mercedes-Benz Motorsport: That was a really exciting qualifying session. The boys were incredibly closely matched through Q1 and Q2, with just thousandths of a second between them. When it came to Q3, Lewis did a great lap but Nico unfortunately struggled for grip on his last two sets of tyres. It's a sixth pole in seven race weekends for Lewis which is a great achievement - and another strong front row lockout for the team. Looking to tomorrow, we know it will be a tough race. Our competitors looked strong on their long runs yesterday and the battle between Lewis and Nico will be intense. We want to make sure we get both cars to the finish - and that we see a great fight between them.

Paddy Lowe, Executive Director (Technical): After quite a scrappy third practice, we came into qualifying a little uncertain regarding our performance. So, we were pleased to see both drivers able to perform well in Q1. That showed us we had a margin to the field - and that it would be a strong competition between Lewis and Nico. One of the interesting choices with the option tyres today was whether we should try and set times on the first or second lap. We chose to do one slower lap, bedding in the tyres before a second quick lap, whereas our competitors generally took the first timed lap - and the results would suggest that this approach worked well for us today. The drivers were very closely matched in the first parts of the session, but Nico then lost rear grip on his final two sets of tyres and wasn't able to match Lewis at the end. Lewis, on the other hand, delivered two great laps good enough for P1 and congratulations to him for his 44th career pole. It's an important result for the team and we're looking forward to an exciting race tomorrow.