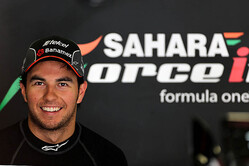 B-spec VJM08 will not make its debut at post-Austrian GP test but rather British Grand Prix.

"We are going to have it for Silverstone," Sergio Perez told reporters at the Red Bull Ring today. "We are testing some of the parts in the test, but the main upgrade will come at Silverstone.

"It is very good news because there is only one race left," he continued, "so hopefully we can score points this weekend and then aim for a much better second half of the year with the upgraded car."

Despite the shortcomings of the VJM08, the result of problems with suppliers hurt by Caterham's demise and also the delay in getting in serious windtunnel testing, the Silverstone-based outfit has given a good account of itself in the opening half of the season, currently just two points behind fifth-placed Lotus.

Having scored points in Canada, it is expected the Mercedes-powered team should add to its tally at the Red Bull Ring, the team hoping to benefit from an upgraded power unit.

"It is an updated one," said Perez, "it is a good place to have a new engine. This track is quite important for the engine, so hopefully it can give us a good boost and we can be in a good position.

"I am optimistic for this weekend," he added. "There is talk of (rain) showers and a concern over the weekend in that respect. Last year I was really strong around here, so I expect to be good. We have a good engine, so this track should suit us better for our car."