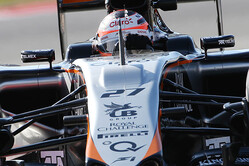 Nico Hulkenberg: "I am very happy to come away from here with four points - that's definitely some positive news. It was not the most eventful race and I was by myself most of the time, except for the battle with Sebastian [Vettel]. In hindsight I probably shouldn't have tried so hard to defend against Seb, but when you're a racer you just don't want to give up a position without a fight. He took the outside line, I was on the inside, braking on the dirt and the marbles. I could see it coming but he didn't leave me anywhere to go so to avoid contact I kept braking, lost the rear and spun. Fortunately I was able to get going and didn't lose too much time. Overall it's been a positive weekend: we keep finding good performance from our VJM08 and the team is pushing hard to find more speed. We've had a good run in the last few races, with Checo scoring in Monaco and my points today. It means we are making good progress and we're closing in on fifth in the championship, so the second half of the season should be very interesting."

Sergio Perez: "It was a tough race today and I just didn't have enough pace to finish in the points. In the first stint I was suffering with a lot of understeer and couldn't really attack the cars ahead of me. The main battle was against the Red Bulls and I managed to get ahead of Ricciardo, but it was hard to match the pace of Kvyat. Towards the end of the race I had to save the tyres, the brakes and fuel, so I just had to make sure I brought the car home."

Robert Fernley, Deputy Team Principal: "It's encouraging to see another strong performance from the VJM08 and to come away from Montreal by adding four more points to our tally. Nico has been impressive all weekend and eighth place is a well-deserved result following an excellent drive. Sergio just missed out on the points, but he wasn't particularly happy with the car balance and in such a straightforward race there were no opportunities to use the strategy to our advantage. The points' standings in the midfield are very tight and we are just a couple of points adrift of fifth place. The whole team has worked extremely hard to extract performance from the VJM08 and we are optimistic of adding more speed in the races to come. So there's plenty to look forward to as we approach the middle of the season."