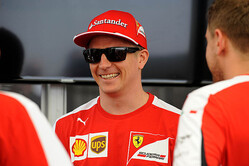 Kimi Raikkonen is to appear at the forthcoming Goodwood Festival of Speed.

The 2007 world champion, returns to Goodwood later this month as part of Shell's programme, the twenty-time Grand Prix winner featuring in a special one-off event on Friday 26 June.

Raikkonen, currently fourth in the driver standings, made a popular debut at Goodwood last year, when he starred alongside 1964 Formula One World Champion John Surtees to celebrate Shell’s long-standing partnership with Ferrari.