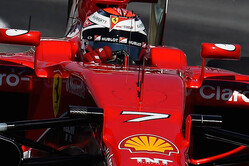 Kimi Raikkonen: "The result of today is not ideal, we expected more than what we got in the end. My start was pretty good but then I did not have enough speed to go through and try to pass the Mercedes at the first corner. The tires were working pretty much ok, but in this kind of circuit fuel saving plays a big part and this obviously limited our speed today. My spin is exactly the same story of last year, I had no problem in any of the sessions during the weekend, but for some reason today in both the outlaps something odd happened with the throttle, and I could not control it . It's a very unfortunate thing. Then we tried to recover from that but we found ourselves on different tactics than the Williams. Overall we had a pretty good weekend, we definitely improved in certain areas but of course this is not the result that I was expecting this morning. We'll keep on working and improving things."

Sebastian Vettel: "It was an entertaining race and I had a good recovery, but obviously there was not much more we could have done. In the opening laps I was not very happy with myself, I was very aggressive but I could not find the gaps, I wanted to go crazy but there was no room, so I had to be patient and it's a shame because these are the moments when if you are lucky you can gain easlily five, six , seven or eight seconds in total race time. It did not happen so we had to fight back afterwards, but the pace was good, I felt happy in the car and especially toward the end the speed kept coming. I lost time at the first pit-stop and I am not sure it was totally on me, something went wrong at the back of the car, but the guys have done a super job so far and they shouldn't be blamed if sometimes things go a bit slower. About the move on Hulkenberg, I noticed that I was already ahead of him on the outside, and I think he braked too late and could not make the corner. We did our best today and I am quite content with 5th, but it's a bit of a shame because around here there is a very nice podium and without the penalty I think we could have had a shot at it."

Maurizio Arrivabene: "If we look at the race pace, it was good, but a lot of circumstances occurred which prevented us from getting a better result. Sebastian drove a great race, making up thirteen places from the grid position. The upgraded engine gave us a positive feedback, but the weekend just wasn't a good one. As for Kimi, he was scheduled for a one-stop race, then we switched to two tire changes when he fell behind Bottas. His spin at the hairpin is something we haven't fully understood yet, it may be a case of contributory negligence as he said the same thing happened last year. It would be wrong to blame either him or the team in any case. He was pushing hard, too, but some issues slowed him down at some stages in the race. We must remain humble and try not to let the podium slip off from under our feet as it happened this time. We're still the second strongest team, but we must look ahead instead of behind us".