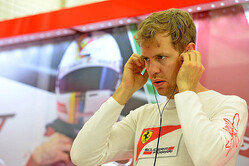 Sebastian Vettel has been handed a 5-place grid penalty following an incident in this morning's practice session.

The German was called before the Race Stewards following today's qualifying session amidst claims that he had overtaken Roberto Merhi after the red flag had been shown following Felipe Nasr's accident.

Having spoken to Vettel and a team representative, and studied video evidence of the incident - the German overtaking the Manor on the run to the pitlane entrance - the Ferrari star was adjudged to have breached Appendix H, Article 2.4.4.1 of the Sporting Regulations.

Admitting that he passed Merhi because he thought the Spaniard had a problem with his car, Vettel was handed the 5-place grid penalty and 3 penalty points.

Having qualified 16th following an issue with his power unit, it is believed the German will start from 18th - though with the stewards still busy awarding penalties to other drivers - a final grid line-up has yet to be officially confirmed.