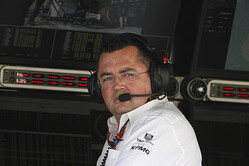 In terms of time, Spielberg is the shortest track of the year. It takes just 68s to complete a lap of the 4.326km circuit, which is made up of only nine corners - the fewest of any circuit on the Formula 1 calendar. There are four long straights, each one preceded by a slow corner, and that places the engineering emphasis on traction and straight-line speed.

To aid the mechanical grip of the cars, Pirelli is taking its Soft (Prime) and Supersoft (Option) tyres to Austria. This is the third consecutive race at which this tyre combination has been used, and the tyre warm-up issues that dominated in Monaco and Montreal should be eased in Spielberg by a slightly more abrasive asphalt.

The circuit is undulating and has an elevation change of 65m; it's also high: the track is situated 700m above sea level, which puts it at a similar altitude to Interlagos in Brazil. The reduced atmospheric pressure reduces the power of a naturally-aspirated engine by seven per cent and forces the turbo on the current power units to spin faster, to compensate for that loss from the Internal Combustion Engine (ICE).

McLaren is the most successful F1 constructor at the Austrian Grand Prix, having won the race six times - most recently in 2001, with David Coulthard.

It's all about: the race

Start time: 1400 (local)/1300 (BST)
Race distance: 71 laps (full world championship points awarded after 75 per cent distance/54 laps)
2014 winner: Nico Rosberg
2014 pole position: Felipe Massa 1m08.759s 226.495km/h
2014 fastest lap: Sergio Perez 1m12.142s 215.874km/h
Chances of a Safety Car: Low. There are large run-off areas at the Red Bull Ring, reducing the chances of the track being blocked by an incident. There wasn't a Safety Car in last year's race, the first GP at the track for 11 years.
Don't put the kettle on... The top 10 all completed the race with a two-stop strategy last year, starting on the Supersoft tyre and then completing two stints on the Soft compound. Most drivers made their first stops between laps 11-15 and their second stop between laps 26-31.
Weather forecast The track is located in the Styrian mountains, so the weather conditions can change quickly. The build-up to the weekend looks unsettled, with temperatures in the low-20s.

It's all about: the track

It's all about: the car

Fuel consumption: 1.7kg per lap, which is high
Full throttle: 70 per cent
Brake wear: Medium. There are only nine corners around the lap, but there are three big braking events - each one slowing the cars from more than 300kph to less than 100kph.
Gear changes: 54 per lap/3,834 per race

Jochen Rindt was F1's first German-born world champion. He was born in Mainz, Germany, but was raised in Graz after his parents were killed in a World War II bombing raid. He took Austrian nationality and became the sport's only posthumous world champion in 1970 when he was killed at the Italian Grand Prix.

Tim Goss, technical director: "One of the most tricky aspects of the circuit in Spielberg is its length. It's a relatively short lap and that makes life very difficult for the Energy Recovery System.

"As a rule, the shorter the lap, the more intense the energy recovery and deployment. We can recover 2mj of energy per lap and we can deploy 4mj, but when there are fewer opportunities to recover that energy, it makes it more difficult to keep the systems in harmony - be that the batteries, or the electric motors on the turbo and the MGU-K.

"Of course, it's the same for all the teams and it helps that we now have a year's experience with these ERS systems, but it's definitely something that needs to be managed."

Fernando Alonso: "Montreal was a difficult race for the whole team - we expected it to be tough because of the nature of the circuit, but obviously a double retirement was especially disappointing. But, of course, just because a weekend doesn't go to plan, it doesn't mean we give up.

"We're still seeing great progress every weekend, and we hope Austria will be the same. Our most important focus is reliability, so that we can get the most time on track in order to make the biggest improvements we can. This is a very physical circuit with four long, fast straights and heavy braking in the corners, so it'll be challenging for our package, but it's a really interesting track to race on.

"Spielberg is a beautiful location for a grand prix and going back there last year after an 11-year break was a great experience. It's still the great circuit it was, and there are quite a few overtaking opportunities which make it even more enjoyable. We've already put the last race behind us and I'm keen to get out there, race hard with our nearest competitors, and hopefully have some fun."

Jenson Button: "Over the past few days we've bounced back from Montreal and we're already looking firmly ahead at the next challenge. As a team, we're measured ultimately on where we finish on a Sunday afternoon, which doesn't take into account the progress we've made behind the scenes, or in practice and qualifying in the build-up to the race, so it can sometimes be difficult to see the positives after a tough grand prix.

"However, it's important that we don't forget how far we've come. Yes, both cars retiring from the race was not at all the result we've been working so hard for, but we are focused on the progress we're still making and the improvements that we've already made up to this point. There's still a huge amount of belief within the team, and we're continuing to push for development in every area back in Woking and Sakura.

"Last year's Austrian Grand Prix was a huge success, and for the few of us drivers that raced here pre-2003, it's definitely considered one of those ‘mini-classics': not so complex in terms of its configuration, but fun to drive. On paper, Austria won't suit the characteristics of our car, but I'm looking forward to enjoying some good racing there and pushing to make more progress in every session."

Eric Boullier, Racing director: "We can't deny that retiring both cars in Montreal was a bitter blow, but, undeterred, we quickly shifted our attention to Austria. What's important to remember is that, despite the disappointment of the last race, we're always learning and improving, so we mustn't be too disheartened, and instead we must keep our focus firmly on the road ahead.

"Reliability has been a key issue during our development push, particularly on Fernando's car. It's a crucial element of a race weekend that we need to improve in order to continue making progress. We're getting there, but, like some other teams, we're now getting to the stage of the season where faults and failures could result in penalties. But those are the rules, and they're the same for everyone."Performance-wise, we expect the Austrian Grand Prix to be another tricky weekend, as it features heavy braking from high speeds and similar stop-start characteristics to Montreal.

"However, before we can even think about performance, we need to work even harder from the very beginning of our race programmes on Wednesday, to ensure all our processes, hardware and software configurations, and our entire approach to the weekend, are flawless, so as to give ourselves the best possible opportunity to get both cars to the chequered flag. In addition, as I say, we may have to consider strategically implementing updates with the aim of improving reliability and performance.

"Speaking more generally about the Austrian Grand Prix, last but not least, Spielberg is a fantastic circuit, immaculately organised and surrounded by stunning scenery, and the incredible fan support makes it even more special. Formula 1's return to Austria in 2014 was a resounding success for the region as well as the sport, so we can be sure of a fantastic atmosphere and exciting racing this time around too."

Yasuhisa Arai, Honda R&D senior managing officer - chief officer of motorsport: "Austria's Red Bull Ring is another power circuit with long straights similar to Canada, which means that it will be tough on the power units. We know that our results in Canada were disappointing, so we are now working hard to analyse, correct and mitigate issues going into Austria.

"The high altitude of the track will also affect the power unit performance, and the vehicle as a whole will require good aerodynamics and downforce. The new ERS system improvements made in Canada have been made to counteract this, and will be adjusted to the new aero and chassis updates planned for Austria.

"We will push forward to be stronger as a team."