Penalties for Ricciardo and Alonso 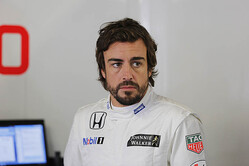 As expected, Daniel Ricciardo and Fernando Alonso have both incurred grid penalties for Sunday's Austrian GP.

The Australian has been hit with a ten place penalty after Red Bull opted to change his engine, his fifth unit of the year.

At McLaren, Alonso also received his fifth engine of the year however, a new turbocharger and MGU-H each ensured another five-place demotions.

Should either driver not qualify high enough to drop the required number of places - highly likely in Alonso's case - they will have to serve a time penalty or stop and go once the race is underway.

To add to the Spaniard's misery, for a while it looked as though it might get a whole lot worse, his McLaren losing power at the end of its install lap in FP1. Thankfully, the issue was subsequently traced and resolved allowing Alonso to complete nine more laps and post a time.