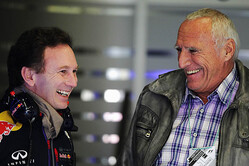 With this weekend's Austrian Grand Prix taking place at his own circuit, the Austrian is ensuring that no opportunity to knock his teams' engine partner is missed.

With no realistic hope of victory on Sunday, nor even a podium finish, Red Bull has taken another massive hit after changing the engines on both cars, thereby ensuring its drivers incur heavy penalties.

Speaking to his company's Speed Week magazine, Mateschitz has ramped up the pressure not so much on Renault, which he clearly feels is a lost cause, but on the sport's powers-that-be.

"They take from us not only time and money, but also the will and motivation,” he lamented of Renault. "There is no driver and no chassis which is more able to compensate for the lack of horsepower. What else has to happen that we will lose our motivation completely?”

As a customer... "you get a motor that's good enough to take a few points from your immediate competitors" says the Austrian, "but it will never be good enough to beat the works team that delivered the engine".

"We're no good at playing the expensive cameo role," he says.

Having issued previous threats that he will walk away from the sport, a move which could see four cars disappear from the grid, Mateschitz insisted that the contract which supposedly binds his teams to remain in F1 until 2020 is of little relevance.

"You can’t force one to stay, when he wants to go out,” he warned.

Little by little, the four-time champions are shedding any dignity they had, the endless complaining alienating fans and F1 insiders alike.

As we said before, seemingly, Red Bull gives you whinge!