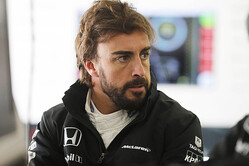 Today was a difficult day for the whole McLaren-Honda team, both drivers being affected by one issue or another.

In the morning Fernando Alonso's car was sidelined with an electrical harness connection issue, but he was able to resume running once he had returned to the pits, where his car was repaired by the mechanics. He also had a minor gearbox issue.

In the afternoon Fernando tried the suite of aerodynamic upgrades introduced for this race. However, his running was limited, and he was unable to get a proper read on their full potential since he did not get a chance to run on the Option tyre.

Jenson Button, who is not running the upgraded components on his car this weekend, also failed to set a time on the Option after suffering an ignition plug issue while on his first lap using the softer rubber.

Due to the time required to change the part, and the potential of encountering the same problem on Fernando's car, we brought the curtain down on our programme shortly before the end of the afternoon session.

<b>Fernando Alonso:</b> "We had a couple of problems during the sessions today - fortunately, we understand them all, but we lost quite a lot of time on the track while we fixed them.

"I had an electrical connection issue in FP1, then some software issues with the gearbox. Then, in FP2, we stopped as a precaution after Jenson had a problem with an ignition plug. We have new engine components fitted in the car, so it's better to run safely today and then fully investigate the problems in order not to have any issues tomorrow.

"That meant we lost some time, and we needed some mileage to get a handle on the new aero package and optimise the performance of the car. Tomorrow, hopefully, we can recover that time."

<b>Jenson Button:</b> "We had an ignition plug issue which stopped us running this afternoon, which was a shame. Having said that, although we didn't get a lot of running under our belts, we were still able to improve the car quite a bit between the sessions, which was positive. It would have been nice to run the car on high fuel to see where we stand though.

"Tomorrow will be tricky, because it's likely that I'll get some grid penalties. When that happens, you need a Safety Car in the race to bring you back into the game, so hopefully that'll be the case.

"It's all about improving, getting the best from what you have, and learning for the next Grand Prix."

<b>Eric Boullier, Racing director:</b> "Today has been a frustrating one - full of minor problems that, one way or another, managed to limit our running during the sessions.

"Fernando had an electrical connection issue at the start of FP1, which took some time to cure, and then he had a minor gear selection issue towards the end of the morning.

"Nonetheless, he was able to run a few laps with the new aero package, and his initial feedback seemed favourable. It would have been nice to have put some more miles on it today, but we'll look at the data tonight and push ahead tomorrow.

"Jenson had an ignition plug issue in FP2, and that brought his running to an early halt. We stopped Fernando as a precaution, too, although there was no reported problem on his car.

"There's plenty of potential in the car, so let's hope we can get a day of clear running on Saturday to see just what's possible. Tomorrow is another day."

<b>Yasuhisa Arai, Honda R&D senior managing officer - chief officer of motorsport:</b> "Heading into this weekend's Austrian Grand Prix, we were prepared for the energy management to be very difficult. It's a short and undulating track; therefore it takes time to find the optimal power unit setting, and unfortunately we lost a significant amount of running in both sessions today.

"During FP2, Jenson's car started to show signs of an ignition plug issue, so we were forced to bring the car back to the garage.

"Fernando's car suffered a harness connector issue and then a gearbox issue during FP1. Although his car didn't suffer from any anomalies during FP2, we elected to bring him in as a precaution.

"We're hoping that we can complete all of the items left on the run plan during FP3, in the lead-up to a better qualifying."