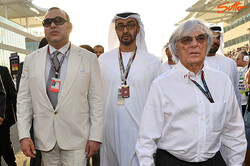 Bernie Ecclestone has scored an early boost in his battle against bribery allegations in Germany. The Formula One boss has revealed that prosecutors have agreed to schedule hearings in his upcoming trial in Munich on Tuesdays and Wednesdays. He says it has been done so that he can continue to run F1 and travel to races at the same time according to an article in the Independent by Christian Sylt.

It is the first time Ecclestone has spoken at length about the bribery scandal since winning a civil case in the High Court about whether F1 was undervalued when it was sold to the private equity firm CVC in 2006.

He claims a recent report in the Financial Times about the implications of the trial didn't give the full picture. Ecclestone was quoted as saying "I've been looking, over the last few years, for somebody who can join me to assist with what I have to do. I will eventually be in a position, if I decide to retire - or unfortunately become dead - to have someone to step into my shoes."

It also quoted him saying "I've been spending time on this [civil] case and to spend time on Munich I am not able to give what I normally would do, 24/7, to the business."

However, Ecclestone told the Independent "of course I can run the company at the same time as doing the trial in Germany." He added "I am in court for two days a week on Tuesday and Wednesday. The judge did it so I am able to go to races at the weekend. I will probably go on Monday nights, because I have to be there at 9.30, stay Tuesday night and come back Wednesday. He said we will get the hearings on Wednesday out of the way before 5 O'clock so I can leave then. It starts in April and goes on until September."

He admits that he will need help to get through the case but stresses that he isn't referring to hiring a second-in-command as he says he has no intention of sharing the wheel. Instead, he says "one or two people here that have been a bit shy on working will have to get their act into gear. I'm going to be bloody busy doing so much that I'm going to need some help or something from internally."