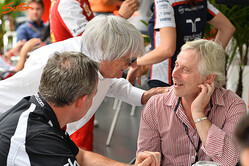 Bernie Ecclestone is almost certainly the sharpest operator in Formula One. Over nearly 40 years he has built up the sport into the global phenomenon that it is today. He is responsible for almost all the key commercial milestones in its history from introducing on-board cameras to expansion into Asian nations. Ecclestone has made an estimated $4bn from F1 and remained in the driving seat despite it changing hands over five times.

Last Thursday a judge in London's High Court ruled that Ecclestone paid a $44m bribe in connection with the sale of F1 in 2006 so you would have thought it must have given him a tremendous advantage, especially since he is famous for counting every penny. However, according to the court judgement, it seems that this is far from the case.

No sooner had the judgement been released last week than reports about it began to flood the media. At 105 pages it is no surprise that the writers of the initial reports did not have enough time to read the document in full. As a result of this, the vast majority of the reports about it over the past few days have focused on the same points - the verdict itself and the judge's description of Ecclestone.

Pitpass readers expect more than that so we took our time with our analysis. As the initial storm of identikit coverage has now passed it puts more of a spotlight on our analysis which makes it all the more important for it to be carefully considered. Let's start with the background.

At the heart of the High Court case was a payment of $44m by Ecclestone and his Bambino family trust to Gerhard Gribkowsky, former chief risk officer for German bank BayernLB (BLB). Gribkowsky was in charge of selling a 47.2% stake in F1 owned by BLB and in 2006 this was bought by the private equity firm CVC for $814m. JP Morgan and Lehman Brothers - two other banks which owned stakes in F1 - followed suit and CVC ended up with control of F1. CVC insisted that Ecclestone had to stay as F1's boss which led to accusations that it was his preferred bidder and that his payment to Gribkowsky was a bribe to ensure that the stake was sold to the private equity firm.

This accusation was made in the High Court lawsuit which was brought against Ecclestone, Gribkowsky, Bambino and its former lawyer Stephen Mullens by German media rights firm Constantin Medien. It claimed to have lost out as a result of the alleged bribe because it had an agreement with BLB which entitled it to 10% of the proceeds if the F1 stake sold for more than $1.1bn. As CVC paid less than this Constantin was not paid at all. However, it believes that if Ecclestone had not engineered the sale to CVC then other buyers would have come forward and paid enough to give it a share in the proceeds.

Ecclestone strongly denies that the $44m was a bribe and, as Pitpass revealed way back in July 2011, he says Gribkowsky threatened to make unfounded allegations about his tax affairs if the money was not paid.

Last week the High Court judge ruled in Ecclestone's favour so commiserations are in order for Constantin and Keith Oliver, the head of commercial litigation for its lawyers Peters and Peters. Constantin will not only have to cover its own costs but also those of the defendants which have accelerated to more than £20m as Pitpass has reported today.

Shortly after the judgement was announced Oliver released a statement saying that "the Judge ruled against Constantin essentially on technical grounds (including extremely complicated questions of German law which is the governing law in the case) and Constantin will be appealing those findings."

Oliver's statement also pointed out that although Ecclestone won the case, the judge's ruling contained a damning description of him which said he could not regard him as a reliable or truthful witness. He also ruled that "the Payments were a bribe" which in turn fuelled doom-mongering reports saying that Ecclestone is on the verge of being forced out of his job by CVC.

Sports reporters have been predicting Ecclestone's exit for more than a decade. Indeed, precisely a decade ago, Bambino lost a court case brought by BLB, JP Morgan and Lehman Brothers which led to similar headlines such as ‘Ecclestone loses sole F1 control.'

You would have thought that the reporters would have longer memories but the predictions of doom haven't done Ecclestone any harm as he loves proving the critics wrong. He is still at the wheel and, although you wouldn't realise it from reading some of the negative coverage, he has triumphed in all of the court cases which have been brought so far in connection with the alleged bribe.

In addition to the failed claim from Constantin, American investment fund Bluewaters sued Ecclestone in New York after it claimed it was the highest bidder for the F1 stake but was rejected by Gribkowsky. As Pitpass revealed the judge ruled that Bluewaters had not provided proof of its higher bid and prevented the case from proceeding.

The recent reports about Ecclestone's supposedly imminent exit seized on comments given to the High Court by CVC co-founder Donald Mackenzie in November. He said that "if it is proven that Mr Ecclestone has done anything that is criminally wrong, we would fire him." However, it clearly does not apply to last week's verdict because it was a civil, not a criminal, case.