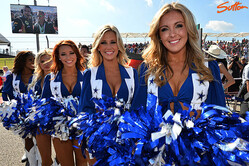 The boss at Texas Motor Speedway has hit out at the scheduling of this year's United States Grand Prix which clashes with the several NASCAR events.

The Grand Prix is scheduled to take place at the Circuit of the Americas on 2 November, the same weekend that the Texas Motor Speedway hosts all three NASCA series including the Sprint Cup's AAA Texas 500.

"I absolutely think it's foolish," said Eddie Gossage, the track's president and general manager, according to the Associated Press. "It's a shot fired by Formula One at NASCAR.

"I can't say I was surprised," he continued, "because Bernie Ecclestone does a lot of foolish things. The thing he unfortunately doesn't recognize is there is an 800-pound gorilla when it comes to major American motor sports. The 800-pound gorilla is NASCAR.

"It's just not smart. There's 52 weeks in the year. But that was the only weekend that Formula One could make it work in Austin, Texas. Give me a break."

Gossage made it clear that he feels the management at COTA lacked the cojones to stand up to Ecclestone and prevent the clash.

"It wouldn't have happened if they had the strength and the fortitude to stand up and say no," he declared.