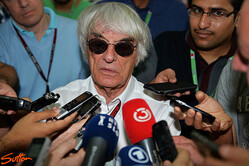 A fierce critic of the new regulations from the moment they were first mooted, Bernie Ecclestone has slammed the new rules as they become reality.

If nothing else, the return of F1 has got the sport back in the headlines, if only for the strange sound, even stranger appendages and the problems Red Bull is encountering.

After months of anticipation the first day of the Jerez test was a disaster. Fans, already disappointed by the general lack of razzmatazz surrounding the unveiling of the new cars - having got used to some of the more theatrical launches including those of Benetton and McLaren at the Allly Pally complete with Spice Girls - were treated to a day of limited running.

While things have improved since, though not for Red Bull, Sebastian Vettel and Daniel Ricciardo completing just 14 laps between them, Bernie Ecclestone – surely a man with other things on his mind - is incensed.

"Look at the last few days," he moaned to the Daily Mail. "I said it was going to be like this... a total farce. They insisted on these new engines. If they wanted to race like this they should go to Le Mans.

"They talk about saving fuel," he continued. "They don’t need these new engines to achieve that. They should get smaller motorhomes. Then they wouldn’t need so many trucks going all round Europe. Mercedes are taking 23 trucks with them everywhere. If they really wanted to save fuel they should stop that.

"The whole thing with the new engines is totally absurd. People want noise... something special, that’s what F1 is all about, and now we have quiet engines and nobody on the track."

Before fans rush to cancel their F1 TV packages, he grudgingly admitted: "The good thing is that the season could be extremely interesting... really unpredictable, and that is the exciting thing."

Of course, whilst Ecclestone has a point, this is the man who wants to see such farcical manipulation of the sport as double points for selected races and, if the rumours are to be believed, trackside sprinklers that can turn a dry race into a wet one at the press of the button.

In other news, the F1 supremo has denied claims that Red Bull will be given double points in the first three races in order to allow it to maintain the gap to Mercedes, McLaren, Ferrari and Marussia. Then again…