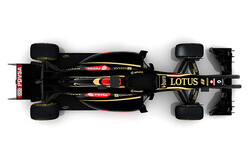 With the sniggering over his car's drooping nose still ringing in his ears, Toro Rosso Technical Director, James Key, has cast doubt on the legality of the version Lotus intends running.

Thus far, all we've seen of the Lotus, the Enstone team opting to miss the opening pre-season test, is a couple of renderings which show a twin nose, the two of different lengths. As we await the actual launch of the E22 some are suggesting that Lotus is merely toying with its rivals in the wake of the new regulations. However, at Toro Rosso, James Key isn't convinced, either by it being a joke or its legality.

"We looked at it early on when the car was quite a bit less mature than now," he told reporters in Jerez. "In theory it was working well but in reality we felt it had too many drawbacks so we didn't pursue it. But we kind of understand where they've gone with it.

"It could be worth a re-visit when things have calmed down," he continued. "I don't think it's illegal, it just whether it's in the spirit of the regulations.

"Our interpretation of a similar idea was slightly different at the front of the nose to the point where we were happy it could be accepted as within the spirit of the regs. The Lotus is probably the most extreme out there, I would think."

Asked if he'd seen anything else that might cause rival teams and scrutineers to go rushing to the rule book, he replied: "Apart from the Lotus nose, no. Not at the moment. The Lotus nose needs a bit of clarification. It's a very clever idea. The question really is 'is it within the spirit?' We'll see."