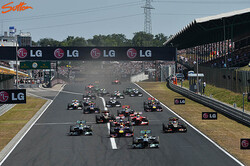 Organisers in Hungary face an uphill task to get the Hungaroring circuit ready for this year's grand prix after revealing it is in urgent need of upgrades to meet FIA standards.

Built in 1985 the circuit has remained fundamentally unchanged, though some minor extension work was performed on the first corner (along with re-profiling in some other sections) in an attempt to improve a track which produces a traditionally processional race. However, after three decades the circuit is showing signs of age, with a number of fundamental components now in urgent need of repair before Formula One descends in July.

"Like in every year, the necessary technical, sporting service and additional actions to organize the race were determined with close cooperation of the FIA and the rights holder," Agnes Kovacs, special events coordinator for the circuit, told Pitpass.

"The aged condition of the utility and electrical network cause problems in the daily and track operation as well. The power demand of the bigger events has to be planned in advance as it can only be fulfilled with the help of generators.

"The condition of the track is not advanced; the re-asphalting and changing of the kerbs cannot be postponed," Kovacs added. "This year's challenge is the additional cost generated by the digital switchover. In order to maintain the expected niveau (sic), we also have to improve the level of the Hungaroring's infrastructure.

"The volume of the tasks for this year: asphalting and the related utility development are high and cannot be only financed by the company, despite the Hungaroring (being a) stable and profitable operation."

Upgrades are expected to cost in the region of £2.5million, a figure some insiders suggest is surprisingly low given the paving work required alone, with organisers claiming to have secured support - in principle - from the government.

"The FIA regulations are really strict," said Kovacs, "analysing the technical and sporting service aspects of the track. The previously mentioned regulations generate a high cost for the company; nevertheless we can say that the Hungaroring has always kept the expected high professional level.

"We would like to emphasize, that naturally the Hungarian GP is not in danger."

A contract extension signed last year should see the Hungarian Grand Prix remain on the calendar until 2021, provided the circuit remains at Formula One standard.