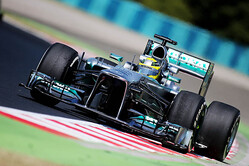 Teams will be able to take part in four two-day in-season tests during 2014 season their dates now confirmed by the FIA.

A number of teams, most notably Ferrari, have long argued for the return of in-season testing, liking its absence to a football team being unable to train between matches. Dramatic regulation changes for the coming season have placed further pressure on the FIA to allow teams to go testing with many raising concerns that the new rules will lead to higher than usual attrition rates in the early races.

In an effort to help teams combat reliability concerns it was agreed within the Sporting Working Group that selected in-season would be allowed, while pre-season testing would be extended in to January. The agreement called for four two-day tests at selected circuits throughout the season, three of which will happen between races, while the final test in Abu Dhabi follows the double points scoring season finale.

The final Abu Dhabi test was preferred by teams who will be able to re-use race engines rather than purchasing new units for the sole purpose of testing.