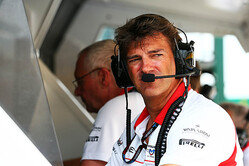 Graeme Lowdon has dismissed fears that Marussia's place on the grid this season is under threat.

While the Russian-owned team confirmed on Saturday that it would be retaining its 2013 line-up of Jules Bianchi and Max Chilton, the official entry list released by the FIA the previous day showed an asterisk against the team's name indicating that the entry was "subject to confirmation".

Speaking to Reuters, at a time when many are speculating over the future of Lotus, Lowdon dismissed fears that his team is in trouble.

"We're just finalising administrative details with the FIA and we have absolutely no concerns at all that the entry won't be confirmed," he said.

Much like those of us who fear the sound of their credit card statement hitting the front doormat, Marussia will face a hefty late payment fine... certainly more than £12.