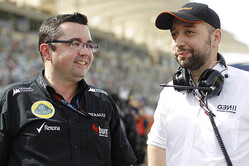 In a brief statement issued today, Lotus has announced that Genii Capital boss Gerard Lopez is to replace Eric Boulier as Team Principal.

The fact that Boullier barely warrants a mention, other than the obligatory "thanks" suggests there is a lot more to this than meets the eye, and that there is bad feeling on Lopez' part.

Indeed, with the McLaren launch just a couple of hours away, and speculation over who might take the reins, Sam Michael and Ross Brawn both linked with the job, Boullier could be the surprise choice of Ron Dennis.

In order to continue strengthening its management structure, to further increase Genii's role in the team and to close the gap between its strategic, commercial and sporting activities, Lotus F1 Team is pleased to announce that its co-Chairman, Gerard Lopez, will combine his position on the board with the role of Team Principal with immediate effect. As a result, the other chairmanship responsibilities will be shared with co-Chairman Andy Ruhan.

The team will announce the arrival of new commercial partners and sponsors when it unveils its 2014 car, the E22, at the beginning of the first Bahrain pre-season test in February. The team will also confirm its organisational structure for 2014 ahead of this test. The team management, car and partner portfolio will illustrate the team's will and desire to continue its quest to become one of the strongest teams in Formula 1 in every sense.

Gerard Lopez, co-Chairman and Team Principal: "Lotus F1 Team has never stood still and we head into what promises to be an exciting 2014 season with an innovative new car, new partners and a new management structure at Enstone. Great things have been achieved over the past years and we need to continue this momentum. With this in mind, we are proud to announce that we have concluded an agreement with YotaPhone and its shareholders. YotaPhone shareholders will become important partners to Genii and YotaPhone a sponsor to the Lotus F1 team this year.

We thank Eric for all his hard work over the past four years and we are confident we can continue to fight as one of the top teams in Formula 1 over the seasons ahead."