How CVC has secured the future of Formula One 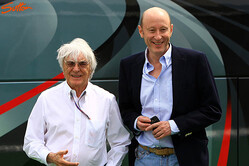 CVC, the private equity firm which is the biggest shareholder in Formula One, is often criticised for taking money out of the sport. However, in fact it has protected it from hostile takeovers in the most unlikely of ways according to an article in the Telegraph by Christian Sylt.

Since CVC bought F1 in a £1.2bn ($2bn) takeover in 2006 it has made more than £2bn ($3.3bn) from the sport as Pitpass has reported in detail. In 2012 CVC made £1.3bn ($2.1bn) alone from selling shares in F1 leaving it with a 35% stake. Its windfalls have put it in the cross-hairs of many critics including some of the smaller F1 teams which sometimes struggle to stay afloat and ideally want more prize money. It is easy to sympathise with them but actually their financial outlook has accelerated since CVC arrived on the scene.

True, this is largely down to F1's chief executive Bernie Ecclestone but CVC threw its support behind him from the moment that it became a shareholder so it too has played a significant part. Crucially, the teams don't just get increased exposure from the new races but more money too. Their prize money comes from a 63% share of F1's underlying profits which is more than double the cut that they previously received. It means that the more high-paying races which are added to the calendar, the more the teams benefit.

Since CVC invested in F1 it has refinanced the bank debt several times which means that the money was paid back with a new loan on different terms. The new loans were of a higher value than the initial one from RBS and the debt held by F1's parent company Delta Topco came to around £1.5bn ($2.5bn) in 2013.

In July last year Pitpass revealed that the latest refinancing, which was handled by RBS and Goldman Sachs, reduced the interest rate on the debt from 6% to 4%. It trimmed Delta Topco's debt-related charges which came to £70.9m ($118.3m) in 2011. They have been a lightning-rod for critics who claim that this is money which is leaving F1 as a result of CVC's involvement.

However, Delta Topco's debt seems to have a silver lining. This is found in the terms of the loan which are known as covenants. They remained confidential until 2012 when CVC planned to float F1 on the Singapore stock exchange and had to outline the key covenants in the prospectus.

As Pitpass can reveal here (right) page 36 of the prospectus states that F1 will default on its loans if any shareholder, other than CVC, gains more than 35% control. In specific, it says that "under the Senior Facilities Agreement, a change of control occurs where a person or a group of persons acting in concert gains the right to exercise more than 35% of the voting rights exercisable in a general meeting of the Company. A change of control is an event of default under the Senior Facilities Agreement, entitling the lenders to, amongst other things, cancel the Senior Debt Facilities."

As the Telegraph article reveals, the threshold has been increased from 35% to 50.1% since then and it has far-reaching implications. First let's consider what would happen if Delta Topco defaults which is the consequence of any shareholder getting its hands on more than 50.1% of F1.

The debt is secured on the shares and assets of almost all the key F1 companies which means that RBS and Goldman Sachs would have legal right to them in the event of a default. In summary, the two banks could ultimately get control of F1 if any shareholder other than CVC gains more than 50.1% of the sport. It would not be the first time that F1 has been owned by its lenders. CVC bought 75% of the sport from a trio of banks after they took over the stake when its previous owner, the German media company Kirch, failed to pay back a loan they had given it.