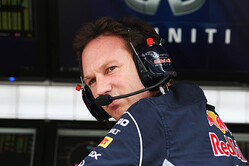 Red Bull boss Christian Horner says he is highly doubtful that the FIA's proposed budget cap, due to be introduced in 2015, will work.

The limited amount of running, due to the numerous problems incurred as teams attempt to deal with the new regulations, was enough to see F1 make the headlines for the wrong reasons yet again.

Then, especially for the British media, there was Lewis Hamilton's crash shortly before the lunch break, and let's not forget those ludicrous protrusions at the front of the 2014 contenders.

However, there are far more serious issues facing F1. Fact is, as in the real world, a parallel universe Planet Paddock can't quite comprehend, the difference between the haves and have-nots is growing. A number of teams are known to be in financial trouble, not all of them at the 'wrong' end of the pitlane.

Backed by Dietrich Mateschitz' billions and the numerous sponsors attracted by his team's success, Horner's team can count itself comfortably amongst the haves. Speaking in Jerez yesterday, while sympathetic to the plight of smaller teams - as people always are in such situations - he cast doubt on whether a cap is workable.

"A top down way of dealing with costs is not the right way of doing it," he told BBC Sport. "Bottom up is a better way."

The magic figure being mentioned is $200m, which, while enough to comfortably finance some team's racing for a season, is around less than half of what the big guns are spending.

Revealing that at last week's meeting of the F1 Strategy Group, "absolutely everybody" agreed that spending had to be reduced, Horner admitted that a number did not believe that budget capping is the way to go about it. Indeed, it's understood that when the assembled team bosses were asked if they were opposed to budget capping he and McLaren's Sam Michael raised their hands.

Ironically, budget capping, the 'false carrot' that enticed Hispania, Virgin and (Tony Fernandes) Lotus into F1 in 2010, is back on the agenda at a time when costs have been forced even higher courtesy of the introduction of new rules that very few wanted.

"We're introducing the most expensive power unit in the history of the sport and all the associated costs with it," said Horner. "It's a bit stupid talking about controlling costs when we're inflicting ourselves with the most unbelievable cost hike the sport has ever seen. I don't know how the little teams are coping."

Accused of wanting to see the status quo remain, and that he is guilty of standing in the way of measure that would control costs, he replied: "To say we are not in favour of cost-saving is absolute nonsense."