Newey talks about the RB10 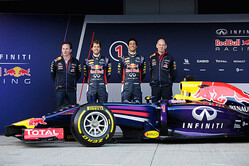 Red Bull design guru Adrian Newey talks of the challenges thrown up by the new regulations including those 'bulb' noses and fuel strategy during races.

"This season we have two big regulation changes. The first, which we've known about for some time, is the move from the normally aspirated V8 to the turbocharged 1.6 litre V6 with a much higher electrical content… in layman's terms, and very strict fuel consumption. We not only have maximum fuel for the race, we also have maximum consumption.

"Most of the races will be fuel capacity limited," he continues, so we'll have to save fuel throughout the race which means different driver styles, compromising lap times at times to save fuel, which obviously means how do you use your remaining fuel; do you go out quick at the start, breakaway and then save fuel or do you save fuel early in the race and try and sprint later? All these sorts of things will come into play.

"It's a big technical challenge," he admits, "they are hugely complicated engines, compared to the V8s, to install. Where the V8 was a well-known package, these engines… the engine itself is easy to install, but then we've got the turbo charger, the coolers, the electrical side in terms of the generator units. Bigger batteries mean bigger conditioning boxes for the batteries it also means more cooling for those batteries. Roughly speaking the radiator area alone has doubled compared to the V8s.

"The second big change is the aerodynamics," he continues, "it sounds quite a small change, a 75mm reduction in the width of the wing on each side, and that was done to reduce the chances of the wink being knocked off when two cars touch, but it has a big aerodynamic effect. Before, the front wing end plates allowed us to put the flow off the tip of the wing outside the front wheel now the front end plates are right in front of the wheel so it's about the worst possible place, it's not inside the wheel or outside. That means the majority of the flow now stagnates in front of the front wheel, a little bit finds its way out the side while the rest comes inside and in doing so makes quite a mess. The front wheel wake becomes much bigger and that causes all sorts of problems.

"On top of that we have a lowered nose which is supposedly on the grounds of safety, to reduce the chance of a car being launched if one car hits another in a manner similar to when Mark Webber went up the back of (Heikki) Kovalainen at Valencia a few years ago. Whether it really makes a difference or not is a moot point, but it's been deemed to be safer so that's what we've had to go for.

"It's a funny regulation," he admits. "Basically, what the regulation does is call for a maximum side view height, it defines the top edge and side view, and then on top of that there's an area 50mm behind the front of the nose which we have to meet and that area is quite low down, much lower than the side view so what you end up with is almost two noses ; one which is the main bulk of the nose to the minimum side view height and then almost a bulb sticking out from that to satisfy the area rule much lower down. So I think there will be a few ungainly noses, which is a shame. To me the aesthetics of an F1 car are important: they should look good and not many owners of these noses could really love them."

Asked about the challenge of getting the RB10 ready in time, what with the effort that went into developing the RB9 right until the end of the season, he replies: "While it appeared that last season was easy for us in terms of the number of wins and points we had at the end of the year, at the critical area around August it was a very tight battle. Mercedes seemed to have good impetus, Ferrari and Fernando had had a very good start to the season and couldn't be ignored, so we were feeling far from comfortable.

"We put a lot into the development of RB9 through June, July and September and inevitably that meant compromises. We only have limited recourses and while we were developing RB9 it meant that work wasn't going into RB10. However, we felt we needed to do that to try to win the championship and then handle the pressure of timescales that resulted from that. I think time really has been our biggest battle. We haven't had the time we would have liked to do the research on the background before committing to the fundamental hardware of monocoque and gearbox case."

Many are concerned at reliability in the opening stages of the season, asked how long before he feels things will settle down, Newey says: "The early races could see quite a few upsets in the order. Reliability is naturally the most obvious concern. The power unit is tremendously complicated and while road car manufacturers make some quite complicated hybrid cars, those cars have had the luxury of years of development before they come to market. We've got three tests, around 12 days, and then we're off to the first race. It's a very compressed development schedule and that can bring a lot of problems, so reliability will be an issue.