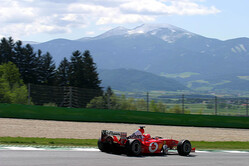 The regional government of Styria has given official approval for the 2014 Austrian Grand Prix to go ahead at the Red Bull Ring.

While the Austrian Grand Prix was officially included on the FIA's 2014 calendar issued in December, there was still a threat hanging over the race in terms of the local government.

The Red Bull ring, which was formerly the Osterreichring and then the A1-Ring, hosted F1 races between 1970 and 2003. The race disappeared from the calendar in 2004, despite its popularity with fans and drivers, due to the country's strict stance on tobacco advertising.

Subsequently bought by Red Bull co-owner, Dietrich Mateschitz, the Austrian initially said he had no plans to host racing at the circuit, particularly F1, and would instead use it to house his vast collection of planes, while there was also talk of using it as a test track for the automobile industry.

When Mateschitz did eventually come around to the idea of bringing the Austrian Grand Prix back to the A1-Ring - renamed in respect of the telecomms company A1 - objection was raised by locals who were against the noise and disruption.

However, in 2011 the circuit, now renamed the Red Bull Ring, hosted rounds of the DTM and ill-fated F2 championship, giving fresh hope to F1 fans. In the wake of the success of the events in late 2012 Red Bull approached the FIA with a view to having Austria replace the newly cancelled Grand Prix of America in New Jersey. Though it was not to be, in mid-2013 Red Bull announced that the circuit would form part of the 2014 calendar, the 22 June event confirmed by the FIA following the meeting of its World Motor sport council in December.

However, it is only now the local government has given the race the official green light. Talking to the German media, Harald Schnedl said that having considered the application for the race and the resultant increase in traffic, noise and emissions he had still granted a 'major events' permission.

He also revealed that a new by-law, which permits up to 225,000 spectators over the three days of the race meeting, cannot be appealed. Since re-opening the circuit had been limited to a maximum of 40,000 spectators on any one day.