Horner: The re-set button has been pressed 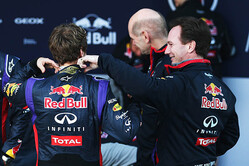 Admitting that his his team has been "riding on the crest of a wave for the the last four year", Red Bull boss Christian horner is fully aware of the challenge in 2014.

"The re-set button has essentially been pressed with this big regulation change," says Christian Horner as he and his team prepare to defend their titles. "It's a clean sheet of paper and therefore an opportunity for the design team to get its teeth into a new challenge. But of course the biggest challenge is in the power unit and that's where we rely heavily on Renault to ensure we have a power unit that is competitive with our rivals."

Asked what impact the raft of new rules will have on the actual racing, Horner says: "The new regulations are going to have an effect on the racing this season, it's going to be a different type of racing because fuel economy is going to be crucial as we are now limited to a hundred kilos of fuel. So there is going to be a much more tactical approach to the racing and that's going to be another challenge."

And what about confidence within the team. "It's dangerous to be over confident," he replies, "It's vital that you have all the elements in place at the start of any season. We've enjoyed great continuity in the last few years and we have a strong driver line-up, a strong technical line-up and we've got great strength and depth within the team, but you can't take anything for granted. F1, like any sport, can be unpredictable."

Sebastian Vettel has a new teammate at Red Bull for the first time. "Daniel is the new boy, he's going to be on a steep learning curve, he'll be benchmarked against Sebastian who is a four time world champion. He's the benchmark in Formula One. That's going to be tough for Daniel but I think he's approaching it with exactly the right attitude. He's looking to learn and benefit from how Sebastian operates and fundamentally he's very fast. I think he could throw up some surprise results this year. I think he has the potential to be a star of the future."

"The atmosphere within the team is excellent, obviously we've been riding on the crest of a wave over the last four years and there's a great determination to see that continue.

"It's been the most intense winter we've ever had," he admits, "we've produced the car in the shortest possible amount of time, through the design and manufacturing process and it's been fantastic to see the team operating the way it has."

Asked about the main focus for the coming season, Horner says: "The main focus is to approach each event and get the best from it. It's a long season, and it is important to optimise your chances at each individual race which is the way we've conducted ourselves previously. It will be no different this year."

Ahead of the team's tenth season, asked about the highlights from the previous nine seasons, he says: "There are so many. Whether it's winning our first world championship in Abu Dhabi, our first Grand Prix victory with that 1-2 finish in China in 2009, any of the Constructors' Championships, any of the Drivers' Championships and some of the fantastic race wins that we've achieved along the way. There's so many, too many to mention."

Check out our RB10 gallery, here.