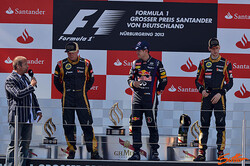 Bernie Ecclestone has revealed that the future of the German Grand Prix has been put in doubt after a $50m bid he made for the Nurburgring was rejected according to an article in the CityAM newspaper by Christian Sylt.

The track alternates every year with the Hockenheimring as the location of the German Grand Prix and ran into difficulty after taking out a $370m loan in 2009. The debt was used to fund construction of an on-site shopping mall, hotel and amusement park.

However, the new facilities were not as popular as hoped and the circuit struggled to make debt repayments. It was then handed additional public support but, in an unexpected twist, the European Commission launched an investigation claiming that the assistance was not granted on market terms. To solve the problem the Nurburgring was put up for sale in May last year and Ecclestone says he made a bid which would have secured the future of the track and the race.

"Nurburgring cost $370 million to build and I offered them $50 million. You have got a massive facility, nice hotels, a lot of land, a lot of buildings and the race track. It's a good investment."

The three remaining bidders reportedly include an American group, German automotive company Capricorn and investment firm H.I.G. Capital. Ecclestone says that a decision will be made on the new owner today.

"On Wednesday they are going to make up their mind whether they are going to accept the offers. None is from me. When I go to an auction I want to leave a bid, which is what I did, and somebody could offer more. I don't know what's happening there. We will see. I just said to them clearly you tell me how much you want and I will tell you whether I want to buy."

Ecclestone adds that the race is safe this year as it will take place at the Hockenheimring but the venue is not a long-term solution. The reason that the German Grand Prix needed to alternate its venue is that neither of them agreed to host the race every year.

In 2013 the F1 Group gave the Nurburgring an additional boost as it agreed to waive the estimated $22m fee for the race and instead took the revenue from ticket sales to the 52,000 spectators. "Last year we took the money they got from the gate," says Ecclestone. "We aren't going to do that this year because it is a different place. They can pay."