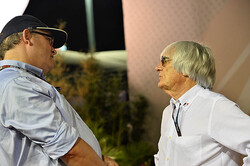 As many of the companies which are involved with Formula One are based in England they are obliged to file publicly available financial documents. These can be seen on a service called Companies House but you can't expect to just read them and get a full picture of F1's finances. To do this requires a good working knowledge of business and, crucially, the business of F1 which is frightfully complex.

Without the requisite background knowledge it is not only easy to make mistakes but also easy to misinterpret what may seem to be significant developments. Addressing these errors as early as possible is important because if they are left unchecked they can become embedded and lead to false conclusions later down the line.

This brings us to a recent report which said that checking Companies House revealed "a rather significant development in the last few weeks." The report refers to it as being the untold story behind F1 boss Bernie Ecclestone's decision to step down from the board of the sport's ultimate parent company Delta Topco.

To recap, when it was announced last month that Ecclestone will be put on trial on bribery charges in April, he decided to resign from his position as a director of Delta Topco though he continues to run F1 on a day-to-day basis.

As Pitpass revealed, Ecclestone's departure from the board placated Mercedes' parent Daimler in particular as it has strict guidelines which state that it "does not tolerate the immoral or corrupt practices of its employees or its business partners." As Ecclestone is no longer on the board of Delta Topco, he is not officially a business partner of Mercedes which of course has contractual agreements with F1.

The report in question points out that when Ecclestone's exit from Delta Topco came to light "it was not announced that he would stand down from a string of other directors positions in the F1 empire as well." These include resignations from the board of companies such as Formula One World Championship and Formula One Management which are involved with the day-to-day operation of F1. The report concludes "it is rather odd that this has not been reported given that it is a very significant change in Formula 1." However, all is not what it seems.

In fact, there is very good reason why Ecclestone's departure from the board of these F1 companies was not reported. It is essentially irrelevant.

Delta Topco is F1's parent which means that every other company involved with the running of the sport is ultimately owned by it. When the structure is viewed as a diagram it looks like a cat's cradle as the companies are not each directly owned by Delta Topco. Instead one is owned by another and so on with Delta Topco at the top of the tree.

If Ecclestone's resignation from the subsidiaries' boards was superfluous the question then arises as to why it happened. There is good reason for that too. It is also because there are companies involved with F1 like Daimler which have corporate guidelines preventing them from dealing with business partners who may be involved with corruption.

Most of F1's key contracts are signed by Formula One World Championship limited, which is an indirect subsidiary of Delta Topco and, as the report correctly stated, had Ecclestone on its board. Accordingly, Ecclestone had to stand down from that as well as Delta Topco and any other F1 companies which the teams deal with, so that it would not conflict with their corporate guidelines.

Resigning from the subsidiaries was therefore a formality and was far from "a very significant change" as was speculated. Crucially, having resigned from Delta Topco, stepping down from the boards of the subsidiaries made no further difference to Ecclestone's power within F1.