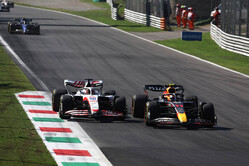 Schumacher started from 17th position on Pirelli P Zero Yellow medium tires and managed a long first stint before coming in on lap 33 of 53, taking on Red soft tires. Schumacher emerged in 18th place but passed several rivals and was up to 12th when a Safety Car was deployed on lap 47 following Daniel Ricciardo's stoppage. Unfortunately the lengthy time taken to retrieve Ricciardo's stricken car meant racing could not resume, denying Schumacher the chance to attack drivers further up the order and fight potentially for a points paying position at the checkered.

Magnussen took the start from 16th on the grid, also on medium tires, but was struck by Valtteri Bottas into the first chicane on the opening lap. The impact caused damage to the diffuser on Magnussen's VF-22, costing him performance, while stewards chose to penalize the Dane for then leaving the track and gaining an advantage despite being the wronged party in the incident. Magnussen came in on lap 24 for White hard tires and boxed once more on lap 48 for softs, in anticipation of the restart that never came. Magnussen finished the race in 16th position.

Kevin Magnussen: "I had contact at the beginning of the race in Turn 1 - I got hit from behind and the diffuser got damaged - and then from there we were slow. The damage was too much, and I don't know exactly the impact it would've had, but nonetheless it wasn't a great day. You always hope that the next race is going to be better. Singapore looks more suitable for our car so I'm looking forward to it."

Mick Schumacher: "Considering I haven't really driven much this weekend and had a difficult qualifying, to then actually be close to the points - I think mentally already being in the points - it was a strong recovery. The Williams was super quick on the straights, even pulling away in the DRS so I had to get the move done somehow, and it was a decent one. Overall, we're really happy about the performance we've shown, and we really were on a good course as everybody else was struggling on their tires and we were on a very good tire."

Guenther Steiner, Team Principal: "The thing about this race is basically we got done by the officials. Kevin had an incident at the start where he got shoved off and his diffuser was damaged. He got a penalty because he couldn't stay on the racing line but with the rear wheels up it's difficult to stay on the racing line - I don't think the penalty is appropriate. I don't think I need to discuss the end of the race because what happened, happened and it wasn't handled how it should've been. Elsewhere, Mick did a fantastic job to get P12 considering his lack of time on track this weekend and our expected pace at this circuit."