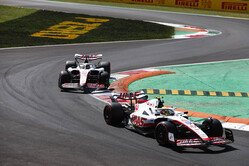 With multiple technical grid penalties being applied post-qualifying, Magnussen will start Sunday's 53-lap race 16th with Schumacher lining up 17th on the grid.

Magnussen saw his two fastest Q1 lap times deleted for exceeding track limits - the fastest being a 1:22.640 on his final run on a second set of Pirelli P Zero Red softs. The Dane's official best was recorded as a 1:22.908 from his opening stint - leaving him 19th on the timesheets. Schumacher was ultimately down on track time heading into qualifying having sat out most of FP3 earlier in the day due to a clutch issue discovered prior to the session. The German posted a best of 1:23.469 on his first set of tires before bettering that on his next set of soft rubber with a 1:23.005 - exiting qualifying 20th overall.

Kevin Magnussen: "It's been as hard as we expected. I think we were close to getting into Q2, and if that had happened - if my lap time hadn't been deleted, we would've been very surprised to get through. For tomorrow, it's always interesting when there are lots of cars out of position."

Mick Schumacher: "We've done very few laps and I think that's the main reason why the weekend has been compromised. These things happen, it's nobody's fault and at the end of the day we win and we lose together. Now it's a matter of who we decide to fight with, but there might be a few cars ahead of us that could be in our window. I haven't done any race runs yet so it will be a race with some improvisation."

Guenther Steiner, Team Principal: "It wasn't a fantastic day today. We simply have to regroup and hope we have a better day tomorrow - there's really not much more to say."