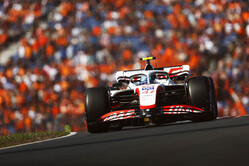 The first two cars on track in Q1 were Magnussen and Schumacher as they sought to get an early lap in the books. The duo recorded a pair of timed laps each on their first set of Pirelli P Zero Red soft tires - Magnussen's best a 1:12.319 to Schumacher's 1:12.559. One final run on another set of new tires followed with Schumacher pushing his VF-22 to 1:11.741 to successfully move into Q2 in P12. Magnussen missed the cut and exited qualifying in Q1 with a final lap of 1:12.041 - the Dane placing P18 on the timesheet.

Q2 saw Schumacher run a set of scrubbed softs to start off, clocking a 1:12.769 to get on the board. The German switched to a new set of the soft compound and duly lapped in 1:11.420 to earn himself a fourth appearance in a Q3 session this season having secured P9 at the checkered. Schumacher's Q3 program mirrored Q2, a run on scrubs followed by a final attack lap on fresh rubber. With a 1:11.442 banked, Schumacher earned P8 on the grid for Sunday's 72-lap race.

Kevin Magnussen: "It looked good this morning and for whatever reason it disappeared again. It looked pretty decent after the first run in Q1 so that's why I'm a bit puzzled that we didn't gain that extra grip that everyone else seemed to, as I just gained two tenths where some others gained eight tenths or a second. We'll push tomorrow and see what we can do."

Mick Schumacher: "It's great to be in Q3 and obviously we're very happy with our performance. It's unexpected as I think we were expecting to go out in Q2 but to get to Q3 and repeat the lap time we did in Q2 was definitely decent, and we now have a good starting position for tomorrow. We haven't made massive changes, we've just been fine-tuning and luckily we started the weekend with a great set-up so we didn't have to make big changes which always helps. It especially helps builds confidence and hopefully makes you faster."

Guenther Steiner, Team Principal: "It was a good day today mainly for Mick getting into Q3, that was our goal. Obviously, our goal was to get in with both cars, and I said anything is possible - either going out in Q1 or getting in to Q3 - and we did both. Well done to Mick, Kevin just wasn't happy on his fast lap and it's so close together, it's very difficult if you are not 100 percent at ease with the car. Tomorrow, I think the car is performing pretty well and we know that Kevin is a good starter, so maybe he will make some magic at the start. All in all, it's very good that Mick starts in the top 10 and hopefully we can bring some points home."

Check out our Saturday gallery from Zandvoort here.